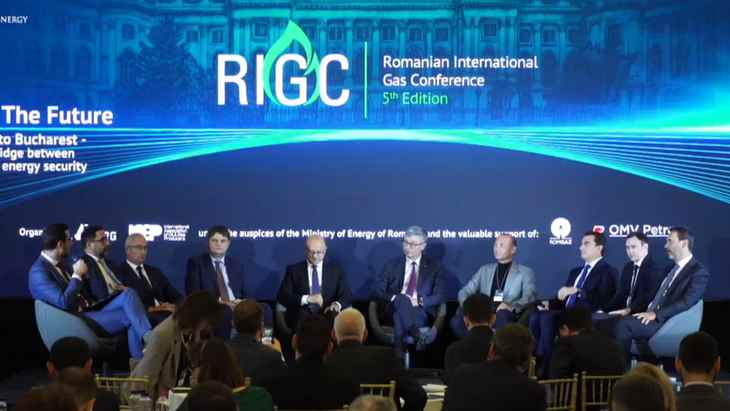 Ministers of nine South East Europe and Caucasus region countries including Romania have met today in Bucharest to solve the energy crisis through regional cooperation. They have held talks inside a closed doors meeting at the Romanian International Gas Conference 2022, an event organized by FPPG. The guests were received on September 21 evening by the Romanian minister of Energy Virgil Popescu, continuing talk on following day at the Bucharest Royal palace, a central Bucharest building now hosting the national and European modern art gallery.

Talks were held on creating a common basys of interconnection, a green corridor of gas and energy to start in Azerbaijan and continue with Georgia, linking Romania to Hungary, and another ways linking Turkey and Greece to Bulgaria and Romania.

Minister Popescu also offered assurances that the winter will be crossed without problems, with 82.6% of gas in storage now and up to 90% in a few weeks.

Azeri Minister of Energy Parviz Shahbazov said: „We have a very useful discussion this morning with PM Nicolae Ciuca taking part – on energy security and what we need on short, mid, long term in for assuring it.

Azerbaijan has been for many years the country that supplies Europe with oil and oil products…Recently we started delivering gas to Europe and we actually have already, within less than 2 yearss, provided more than 16 bcm to Europe… This year the gas supply will increase 40% over the past year. We also discussed about the extension of Southern gas Corridor. Over the next 5 years we want to double our gas supply to Europe”. But this cannot be done over night and more inter-governmental discussions are needed. Also, the Caspian sea has a huge wind energy potential in shallow waters- a very economically viable project- which may transport wind energy to Georgia, Romania, to Hungary and western countries.

Romania may be included in  the extension of the Sourthern Gas corridor, while Socar will also extend its 68 gas-station network locally, he added.

While vicePM of the Republic of Moldova Andrei Spînu emphasized the need for gas and resources of the country, which was the first to be pressured by Russia after a 35% cut of gas last October, The Greek Energy minister Kostas Skrekas said that the Russian blackmail has put pressure on all countries, which need to support countries such as Ukraine and Moldova.

”Europe will be united continuing to support Ukraine”, he said. Greece has a 7 bcm regasification plant and  also a floating storage unit undergoing in Alexandropouli. Greece will also double flows as the IBG Interconnector will become operational on October 1.

All of the ministers said that the market is not functional, and short, medium and long term mesures are needed to ensure security of supply and a normal pricing.