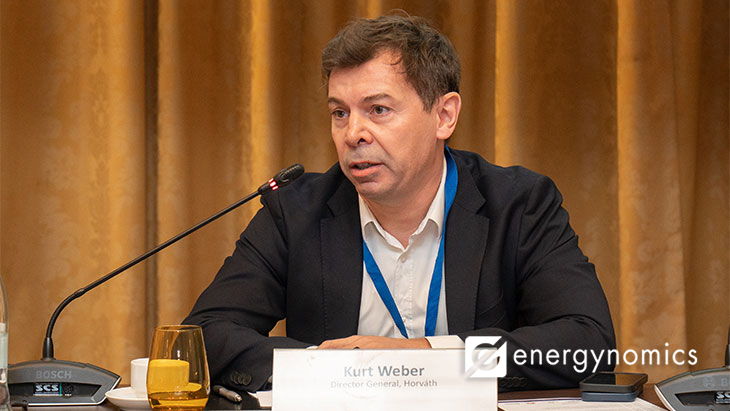 The national energy system is not ready to take all the amount of energy from renewable sources that will enter the market. For this reason, not all new production capacity may enter the system. On the other hand, ESCO-type companies will gain more and more ground in the future energy landscape, explained Kurt Weber, general director of the Horváth consulting company, during the “Future of utilities – 2022” conference, organized by Energynomics.

“The national system is not ready for the wave of renewables that is about to enter the market. It will be interesting to see how many of these capabilities find their place. These investments in renewables greatly affect existing assets and grid investments. Now there is not enough energy in the market, because the legislation has completely discouraged investment, and only expensive and polluting sources remain,” said Kurt Weber.

The changes the energy system is going through, as a result of the wave of green energies and the obligation to reduce the carbon footprint, will also cause radical transformations in the way utility companies relate to their customers. In the future, the role of such a company will be not only to provide energy but also to support customers with solutions to optimize energy consumption and save energy.

An opportunity will be represented by the new concept of distributed generation, which has the potential to reduce the price of energy. To work within this new concept, energy producers and consumers will need to be as close as possible to each other, to avoid high energy transport costs, but also to minimize network losses.

However, the concept of distributed generation should only be used where it can produce the most positive effects. An increasing role will be played by ESCO-type companies (the company that develops, designs, builds and finances projects aimed at reducing energy consumption – e.n.), and thus, consumers’ dependence on suppliers will decrease.

“We have to see where such a system makes sense. Some networks of producers and consumers will be created that constitute the technical infrastructure for the concept of energy communities. These concepts attract a lot of funds, but they will have an impact on the big utilities, whose role will change. We are now seeing many firms investing in manufacturing capabilities. Their primary drive is to get as much co-financing as possible. It’s worth seeing what role storage capacity plays in such projects,” added Weber.

Currently, the energy market is in a highly volatile context in terms of prices, and the outlook is not very optimistic. According to Weber, the price of natural gas will continue to be high in the medium term, and for this reason, it is expected that many projects to build gas-fired power plants will not be realized.

Also, the price of energy will continue to be high, especially because of the CO2 certificates imposed on producers of energy sources considered polluting.

“There are many aspects that give headaches at the moment. The news regarding the energy market in Romania is not very good. Now they have all filled their natural gas storages, but in the medium and long term gas will remain expensive. I don’t think the current context is encouraging for investments in gas energy production capacities. It’s a smoke screen and it will be very difficult to get new gas projects done, so I think we’ll have to live with coal capacity for a while longer which will drive energy prices up. As a result, the price of energy will continue to be high and will be influenced above all by the price of CO2 certificates. Additional pressure on the energy system will be exerted by heat pumps and chargers for electric cars. We will see quite difficult times in the coming years”, Weber also said. He also stated that Horváth has his own models for markets simulation that take into account aspects and real figures, “not what the ministry or what other officials want” to hear.

previousEnergy investments are delayed because the equipment delivery times doubled or even tripled
nextNBR increased the key interest rate to 6.75%, inflation to decrease in 2023