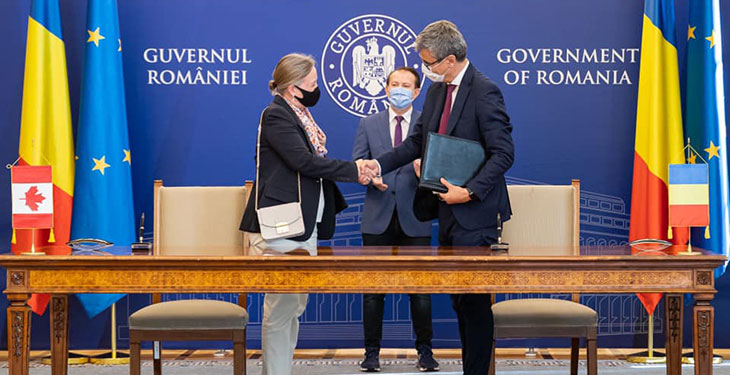 The Ministry of Energy on Thursday signed a Memorandum with the Department of Natural Resources of Canada, a state that is the technological “father” of the Cernavoda power plant, on strengthening cooperation in the field of civil nuclear energy, the Government announced. The memorandum will be signed by the Minister of Energy, Virgil Popescu, and by the Ambassador of Canada to Romania, Annick Goulet. Prime Minister Florin Cîțu will also attend the signing ceremony, according to Profit.ro.

The Canadian company Candu Energy, part of the SNC Lavalin group, owns the intellectual property rights over the CANDU technology implemented in Cernavoda as well.

In June, the Parliament adopted the Law on the ratification of the Agreement between Romania and the USA on cooperation in the civil nuclear field, for the expansion and refurbishment projects of the profile plant in Cernavoda.

The agreement stipulates that US entities should be selected for the positions of contractor for engineering, procurement and construction (CPI) and major engineering company in the mentioned projects, and will collaborate with the Canadian nuclear technology provider Candu 6, and the Bucharest authorities will try to convince the European Commission that certain contracts necessary for the refurbishment of reactor 1 and the construction of Cernavoda units 3 and 4 are exempted from EU public procurement regulations. According to official statements, the expansion and refurbishment projects in Cernavoda will be implemented by a consortium of companies from the USA, Romania, Canada and France.

previousCEZ: There is a clear interest in energy consumers to become prosumers
nextVirgil Popescu: There are no problems with fuel stocks