Acasă » Electricity » D. Pintilie: WATTO Stations is looking for additional capital in the second round of funding to launch the local pilot stations

D. Pintilie: WATTO Stations is looking for additional capital in the second round of funding to launch the local pilot stations 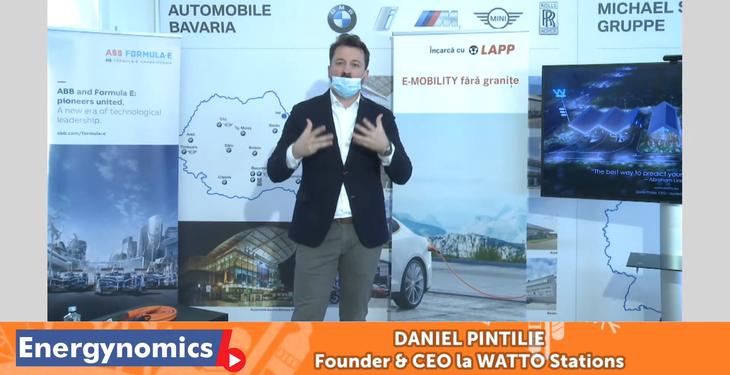 WATTO Stations, a start-up founded in 2019 and financed by a venture capital investment found, is planning to develop a network of Ultra-Fast Charging stations outside the cities on major driving corridors, said Daniel Pintilie, Founder & CEO of WATTO Stations, at the conference “E-vehicles – The fast deployment“, organized by Energynomics.

“Our mission is to make long-distance driving possible to any electric vehicle, personal or commercial as well, while most of the cars will be sufficiently charged in less than 10 minutes. We started with the idea that most e-charging points are concentrated in just four European countries while there is no sustainable solution for charging commercial vehicles. Therefore is a big problem for all those who want to travel long-distances; our solution solves exactly this problem by building a network of high-powered, Ultra-Fast Charging stations, initially in Romania and later in Central and Eastern Europe. We are unique because of our future-proofed, smart integrated concept – we will be able to offer Ultra-Fast Charging services for commercial electric vehicles, minibuses and trucks and personal vehicles as well. You will be able to charge most of your battery in less than 10 minutes – a rare solution in Romania and CEE. We will integrate photovoltaic installations with storage, being able to generate clean energy. There will be also cafes and modern lounges for our customers”, he said.

”WATTO mission is concentrated around the global effort to fight pollution from transport. EU has recently committed to ambitious targets to reduce pollution and to electrify road transportation. Such ambitious projects as WATTO’s to provide future-proofed, highly-efficient and Ultra-Fast Charging solutions will be soon embraced by as many investors as possible,” said Daniel Pintilie.

“Our plan is to connect the three seas – the Black Sea, the Baltic Sea and the Aegean Sea. It is a very ambitious project, highly important for the whole region. The first phase is to build Romania’s East-West corridor, and then to cover as much of Romania’s major routes as possible; after this step we plan to reach the entire CEE.”

At the moment, WATTO Stations is conducting discussions to get new financing to start building the first pilot stations, a process already delayed several times by the health crisis. “We have already committed 1 million euros by our investor, Early Game Ventures. Our next major challenge is to succeed, under these pandemic conditions, in convincing other investors as well to bet on a future that will be mainly electric,” he added.