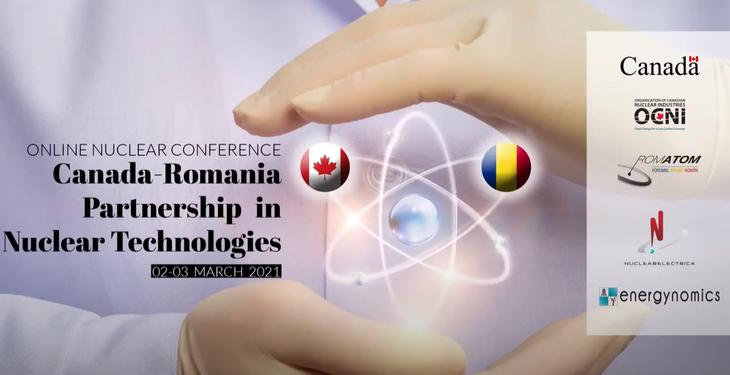 During March 2-3, 2021, the Organization of Canadian Nuclear Industries (OCNI), ROMATOM, Energynomics, Nuclearelectrica and the Embassy of Canada to Romania organized the online event “Canada-Romania Partnership in Nuclear Technologies” dedicated to showcasing the long-standing cooperative relationship between the nuclear industries in both countries as well as to discuss perspectives of new nuclear projects.

The event was the first one to mark the anniversary of Unit 1 of Cernavodă NPP 25 years since entering commercial operation in 1996, giving testimony to the beneficial cooperation of Romanian and Canadian specialists and expertise which made possible the commissioning of the first nuclear reactor of Romania and went on to deliver excellent results in the construction and completion of Unit 2 of Cernavodă NPP which entered commercial operation in 2007.

The two day event featured inputs of 50 speakers covering broad topics such as the role of nuclear energy in the future energy mix, strategy and policy aspects, new nuclear projects in Canada and Romania, including Cernavodă NPP Units 3 & 4 project and Unit 1 refurbishment project, the successful Darlington Unit 2 refurbishment project, nuclear regulatory issues, fuel cycle and waste management, Small Modular Reactors, innovation applications of nuclear power in non-electricity applications such as Cobalt 60 production, clean hydrogen production, and discussion on supply chain cooperation between the Romanian and Canadian nuclear industry companies represented by OCNI and ROMATOM associations. The event also includes a special section dedicated to sharing knowledge and best practices between universities specialized in the field of nuclear education, as both countries recognize the importance of attracting, training and retaining the highly qualified workforce for current and upcoming projects.

“From utilities to operators, regulators and research laboratories to waste management and advanced manufacturing, strengthening trade and cross-cultural expertise in clean energy and nuclear technology and investing in nuclear technology will play an important role in helping us achieve and inclusive and sustainable recovery from Covid-19, here in Canada and around the world. It will also help us achieve our Government’s commitment to reaching zero emissions by 2050 and will continue to play a vital part in the global quest for safe, clean, renewable energy.” – Hon. Mary Ng, P.C., M.P, Canada’s Minister of Small Business, Export Promotion and International Trade

“Today, Canada and Romania are working together, through the use of nuclear energy, towards the next phase of Romania’s energy development and decarbonization goals. Canada and the Canadian nuclear industry are looking forward to working with their Romanian counterparts on the refurbishment and new builds at the Cernavodă Nuclear Power Plant. Moreover, the Canadian industry is keen to extend its partnership with Romanian companies with expertise in CANDU beyond the Romanian market and tackle projects in Canada and in other countries.” – H.E. Annick Goulet, Ambassador of Canada to Romania, Bulgaria and Republic of Moldova

“Cooperation with the Canadian nuclear industry is a crucial factor in completing the two new units at Cernavodă NPP, within a broader Euro-Atlantic context. Their commissioning, together with the extension of the lifespan of Unit 1, will make a substantial contribution to achieving the environmental targets assumed by Romania, but also to strengthening energy security of supply and welfare at national and regional levels. The relationship between the two industries, from Romania and Canada, was successfully tested at the completion of the two units in operation at Cernavodă, completed in 1996, Unit 1, respectively 2007, Unit 2.” – Teodor Chirica, Honorary President of ROMATOM.

“In Romania, today, nuclear power ensures 11.000 jobs which could increase to 20.000 jobs once the new nuclear projects are initiated. The capability of the Romanian nuclear industry is evaluated at EUR 1 – 1,6 billion, representing about 30% of the Engineering, Procurement, Construction and Commissioning works of Cernavodă NPP Units 3 and 4, which is a significant contribution. The Romanian nuclear industry looks forward to the emerging new nuclear projects in both countries and for opportunities to further cooperate” – Lucian Rusu, President of ROMATOM.

“The Canadian-Romanian partnership in nuclear has significant importance for Nuclearelectrica and the excellent safety track record and robustness of the technology used in Units 1 and 2 gives credit to our long-term cooperation. Nuclearelectrica is member of CANDU Owners Group and has worked side by side with other nuclear power plants in the CANDU family to deploy the highest standards of safety and efficiency. Looking towards the future, Romania is firmly engaged down the path of further developing its nuclear program with ambitious strategic projects with national and regional positive social, economic and environmental impact: the extension of nuclear capacity through Cernavodă NPP Units 3 and 4 project, the refurbishment of Unit 1, the Tritium Removal facility as well as innovative projects such as the development of the SMR technology, Cobalt 60 production and clean hydrogen production for which nuclear can be an economically feasible solution due to its baseload capacity. We see the Canadian-Romanian partnership in nuclear technology as an accelerator of new nuclear projects to market and we wish to capitalize on the existing expertise and know how available on both sides.” – Cosmin Ghiță, Nuclearelectrica CEO

“OCNI is very pleased to work closely with our Romanian supply chain partner ROMATOM, SNN, and the Canadian Embassy in bringing together Romanian and Canadian nuclear industry leaders and technical experts to discuss a variety of important topics covering major nuclear projects in both countries that will contribute to both national and global climate change mitigation and save lives through the production of medical isotopes, while creating and sustaining thousands of high-quality jobs in Romania and Canada. We are proud of the 50 years of collaboration between Romania and Canada in the peaceful uses of nuclear energy and look forward to another 50 years of collaboration on nuclear electricity generation as well as on new applications of nuclear technology in health care and green hydrogen production.” – Ron Oberth, OCNI CEO

“SNC-Lavalin is both pleased and honored to have played a significant lead role in the collaboration between the Canadian and Romanian nuclear industries since the beginning. It has been our privilege and a responsibility that we take very seriously. We offer our congratulations to SNN on the 25th anniversary of Cernavodă Unit 1, the first of two CANDU units in that country. We look forward to continuing our relationship with SNN and the Romanian supply chain for the next 25 years on their journey into the next phase of nuclear energy.” – Bill Fox, SNC-Lavalin Executive Vice President, Nuclear

ROMATOM was incorporated on January 10th 2001 and currently represents the interests of 40 companies in nuclear and related fields in Romania. The mission of the Association is the promotion of the peaceful use of nuclear power in Romania and the support of the national nuclear program, as well as international cooperation with the affiliated organization – The European Atomic Forum (FORATOM). At the same time, ROMATOM promotes the interests of its members, representing the voice of the Romanian nuclear industry which comprises research and development centers, equipment manufacturers, construction, engineering and consultancy companies, service providers with an extensive experience and expertise in the nuclear field.

SN Nuclearelectrica SA is the Romanian nuclear utility company, which operates Cernavodă NPP Units 1 and 2, utilizing CANDU technology, and the Pitesti Nuclear Fuel Plan. Nuclearelectrica supplies 18% of the internal energy demand of Romania. The company was extensive plans to further develop the nuclear program in Romania: the construction of Cernavodă NPP Units 3 and 4, the refurbishment project of Unit 1, the Tritium Removal Facility as well as interest in innovative projects such as SMRs, Cobalt 60 and clean hydrogen production.

About the Organization of Canadian Nuclear Industries (OCNI)

OCNI is an association of more than 220 Canadian suppliers to the nuclear industry that employ more than 15,000 highly skilled and specialized engineers, technologists, and trades people. OCNI companies design reactors, manufacture major equipment and components, and provide engineering services and support to CANDU nuclear power plants in Canada as well as to CANDU and Light Water Reactor (LWR) plants in offshore markets. OCNI signed a second MOU with ROMATOM on October 30, 2018 in Bucharest.

previousSIXT GROUP won the tender to deliver 20 electric buses and 25 charging stations, in Constanța
nextBosch is working with Microsoft to develop a software platform for vehicles