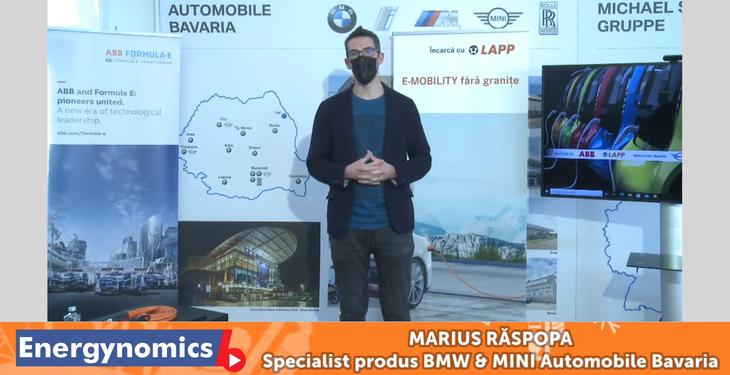 “The second model launched by BMW is BMW iX3, the brand’s first pure electric vehicle activity, which also comes with some interesting elements”, said Marius Răspopa, at the conference “E-vehicles – The fast deployment“, organized by Energynomics.

The MINI Cooper SE features increased aerodynamics, special rims and supports fast charging in both AC and DC up to 50 kW in Type 2 standard. It can be charged to any 220 V outlet available. The WLTP range of up to 240 km in WLTP regime is provided by a 32,6 kWh battery, with an engine power of 184 HP.

Energynomics‘ partners will enjoy receiving a gift, when purchasing a MINI Cooper SE – that is a wall charging station (wall-box)!

”0 to 60 km/h acceleration only takes in 3,9 seconds, which is extremely useful in urban traffic. And the 0 to 100 km/h acceleration takes 7,3 seconds, thanks to the instant response of the electric motor,” Marius Răspopa said when presenting the mobile application MINI.

The BMW iX3 is equipped with the fifth generation of eDrive, the proprietary BMW propulsion system having an efficiency of over 90%, not being dependent on rare metals. The assembly is 30% more compact, and the batteries have an energy density 20% higher than previous generations. The car can be charged fast, at stations up to 150 kW. It can be charged in just 30 minutes with the power needed to cover 250 km. The total range is 460 km. It can reach 100 km/h in 6.9 seconds, thanks to the 286 hp (400Nm) engine.