Vajkovszki: Mazda chose the LAPP cables to equip its models 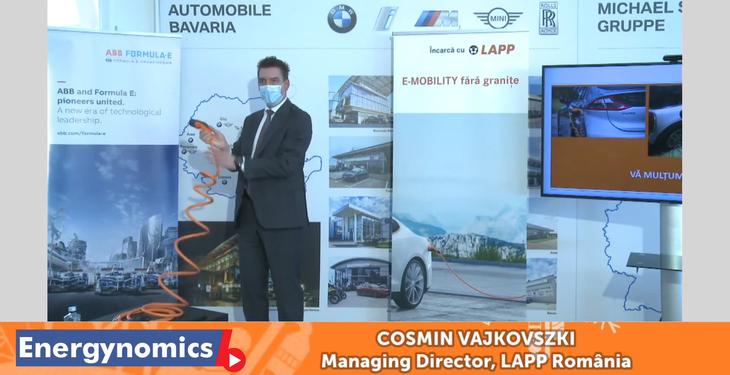 Since February 2021, Mazda decided to equip the hybrid plug-in models with cables made by LAPP, said Cosmin Vajkovszki, Managing Director, LAPP Romania, at the conference “E-vehicles – The fast deployment“, organized by Energynomics.

”The market is growing fast; due to the size of the market and the speed of development, our LAPP Mobility division has been separated from the group, becoming one of the business lines where we put high hopes for our future development. We have seen a rather sharp increase in the sale of electric cars and hybrid plug-in in Romania, too”, he said.

For more than 60 years, LAPP has been offering solutions for cables, connectors and accessories for electrical and data connections, worldwide. On 20 March, the company celebrated 100 years since the birth of its founder, Oskar Lapp, the first entrepreneur to turn an industrial product into a brand. LAPP Mobility, the solution division dedicated to electromobility, was launched in 2009 with the establishment of the first solution development office and the launch of the division in 2010. In 2011 the first Renault vehicle was fitted with a spiral cable by LAPP.

“In 2012 we started working with BMW, a strong and long-standing partnership that continues today,” Vajkovszki said.

“Developing our solutions in cooperation with the manufacturers of electric cars or hybrid plug-in is one of the keys to the success of the company. In 2016, we started working with the Land Rover-Jaguar group, in 2018 with the Hyundai Group, and since February 2021 Mazda became our new partner,” he added.

As a separate unit, the electromobility division benefits from the entire logistics network of the group, with a presence in more than 80 countries, Vajkovszki said, presenting the company’s solutions. “We are present at all stages of product development. Starting from research and development – we have a team of 70 people in Germany for R&D, production – cables are produced in Germany, plus logistics and distribution, we are present in over 80 countries.”

previousAutomobile Bavaria presented the new electric models from BMW Group
nextLower the cost of checking and registering invoices by up to 90%. Case study Carrefour (25 March)