Acasă » Electricity » The US approves $ 1 trillion in infrastructure investments

The US approves $ 1 trillion in infrastructure investments 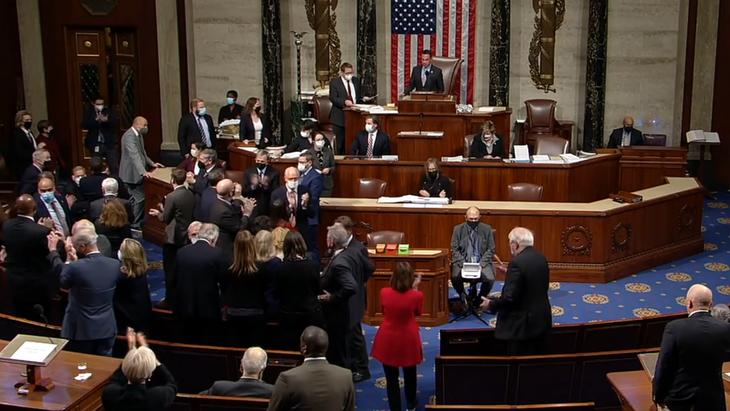 The US Congress finally adopted on Friday night the vast investment plan in infrastructure desired by President Joe Biden, who only has to promulgate the text for its entry into force, writes Agerpres, quoting AFP. The adoption of the $ 1 trillion plan in the House of Representatives, after approval by the Senate in August, is a partial victory for the US president. The vote on President Joe Biden’s other gigantic plan, 1,750 billion dollars for ecology and social protection, is expected no sooner than November 15.

America’s to-do list has been growing for years, since well before President Biden and a bipartisan committee in Congress agreed this year to a historic upgrade of the nation’s aging infrastructure, wrote the New York Times. The plan finally approved on Friday will address transportation, water, broadband, energy and public safety needs that have been building for years, sometimes decades. The bill includes $550 billion in new spending, as well as $450 billion in previously approved infrastructure investment.

“This is a game changer,” said Mark Poloncarz, the county executive in New York’s Erie County. “Right off the bat, I have somewhere around $150 million in capital projects we could move, from bringing our wastewater treatment system into the 20th century to smaller bridges, some of which are 100 years old.”

Broadband systems will get a $65 billion infusion, as will investments to rebuild the electricity grid, to refurbish power lines and accommodate renewable energy sources. A $55 billion pool of funds would expand access to clean drinking water. Some $25 billion would go to airports and $17 billion to ports. Some $110 billion will be allotted to roads, bridges and other major surface transportation projects. Another $66 billion will go to passenger and freight rail, including enough money to eliminate Amtrak’s maintenance backlog. Yet another $39 billion will modernize public transit, and $11 billion more will be set aside for transportation safety, including programs to reduce fatalities among pedestrians and cyclists. In the Northeast, $7.5 billion in funding for zero- and low-emission buses and ferries could help Connecticut and New Jersey to electrify municipal bus fleets.

The program offers a rare opportunity for states that for decades have been forced to balance huge short-term backlogs of repairs and upgrades against larger, longer-term projects and needs.

Government agencies will determine which projects are funded, but some state priorities were written into the bill during negotiations. One small part of the measure, however, has been especially anticipated in California: a $7.5 billion initiative to build a nationwide network of chargers for electric vehicles. Although 40 percent of the electric vehicles in the nation are sold in California, sales still lag in part because car buyers fear they will be unable to easily recharge on long car trips. So far, even electric vehicles with long ranges — Teslas, for instance — lack the power to make the 400-mile journey between San Francisco and Los Angeles without stopping for a charge.

previousEMZ invests 5 mln. euro in Resita with the help of AHK Romania
nextAnna Akhalkatsi (World Bank): COP26 must be about ambition and action