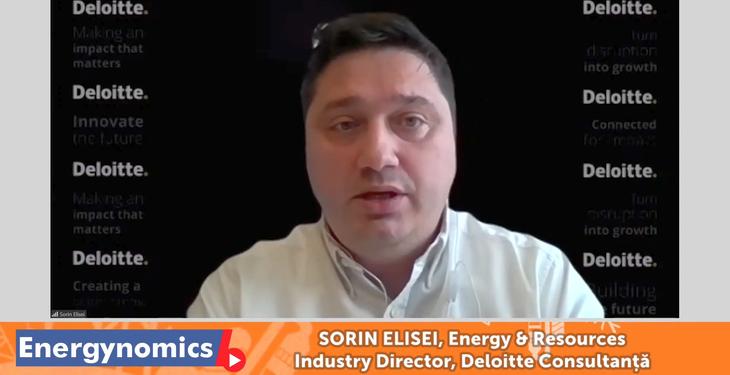 Romania has to reach the objective of climate neutrality in 2050, with an intermediate threshold in 2030. In order to understand the energy transition, we must understand the whole context and have clear communication, especially from the perspective of Romania’s position on taxonomy and the role of natural gas, said Sorin Elisei, Energy & Resources Industry Director, Deloitte.

“The discussion about transition is an important one as the range of funding become clearer. Investors, however, need a well-defined strategic and institutional framework. This strategic framework is to show where the Romanian state will favor investments – in which areas. There is a lot of money, but they should be well distributed,” he said, at the “Investments for Energy Transition” conference, organized by Energynomics, on 28 January.

“Regarding the sources of financing, we can discuss projects based on commercial perspectives, where the market provides investors with the price signal and the stable and predictable framework for such an investment to recover. We are talking about 20-25-year recovery cycles for some big investments. We still have work to do on the legislative framework. We still lack a form for bilateral contracts (PPAs) that we see in other countries. Then, we want to access various instruments – the Modernization Fund, structural funds, the Just Transition Mechanism, state aid schemes. Here it is important to look at the size of potential beneficiaries.”

One very thorny issue is state aid – in order to get the approval from the European Commission, in the case of very large projects of hundreds of millions of euro, it can take two or three years from the notification to the final answer. “There will be money, but we need to work very carefully on the implementation framework – and here the banks, which have a big say, but also the beneficiaries, must be involved, from the very first discussions, so that the Romanian state come with an approach already discussed with the market,” he added.

“The money we need to make the energy transition must include the private sector, international financial institutions and commercial banks – without them, the transition will not take place. From the point of view of the sources, there are those accessed in Bucharest, but also sources accessed in Brussels – such as the Innovation Fund. The transition will undoubtedly require new technologies, so we should be more proactive – both in private companies and at the state level, by sending the right signals. New technologies come with pilot projects, demonstration projects, large R&D and innovation component – we should focus our attention here too, not just on mature technologies.”

At the same time, large companies will receive more and more money from structural funds, through financial instruments that have not been available so far. However, it is important to see how new power generation projects can be accepted in the power grid, he said, insisting on involving Transelectrica in all discussions on the matter.

previousClaudiu Crețu: Elcen will rent modular capacities only for next winter, implementation would take 2-3 months
nextPhoton Energy develops solar projects of more than 790 MW, 10% in Romania