RWEA: RenewAcad will convert 8,000 miners into technicians for the renewables industry 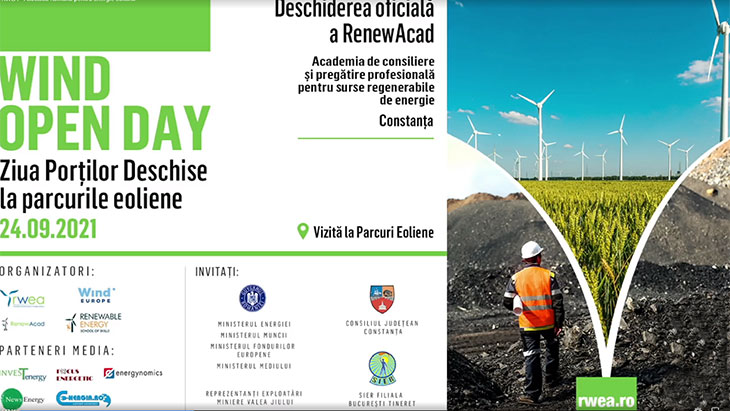 The Romanian Wind Energy Association (RWEA) has officially inaugurated RenewAcad, a center through which it intends to reconvert thousands of former miners and energy engineers into technicians for the renewables industry. The event took place on the occasion of Wind Open Day, an event where could be visited Enel and Monsson wind farms, according to e-nergia.ro.

The inauguration ceremony was attended by young people from several areas of the country, including employees of the mines in the Jiu Valley.

“In the wind industry we are excited to offer so many opportunities for miners. This is the future, for Europe, for Romania, for our communities, and we want you all to be part of it,” said Giles Dickson, head of Wind Europe.

“Other countries in the European Union do not have the capacity to convert miners. In Romania, there is, you moved before everyone else,” said Dickson.

“I am glad to see that what you promised two years ago, you managed to put into practice in Petroșani. It is good for the area, I hope that the inhabitants of the Jiu Valley will be open to this project. It is worthwhile for those people to be taken into account, it is worthwhile for someone to think about them,” said a miner from Valea Jiului, Sebastian Tintirică, present at the event.

RenewAcad, which has a first training center in Constanța, at Monsson, plans to train a total of 8,000 former miners as technicians for the renewable industry in ten years, said Sebastian Enache, project manager and director of the Monsson group. Next week, the training center in Petroșani, in the Jiu Valley, will be opened.

The initial training of a technician for the renewable industry costs about 8,000 euros and then each company spends about 3,000 euros each year. For those who will sign up for RenewAcad, the 8,000 euro courses will be free. Subsequently, whoever graduates from it will have a competitive advantage when they enter the sector. And RWEA member companies will select them as a matter of priority when hiring.

previousANRE expects a new wave of prices surges in 2022 for customers still in universal service
nextTeodorescu, Renovatio: We are developing 2,000 MW in various stages, in Romania – raw materials prices surprised us