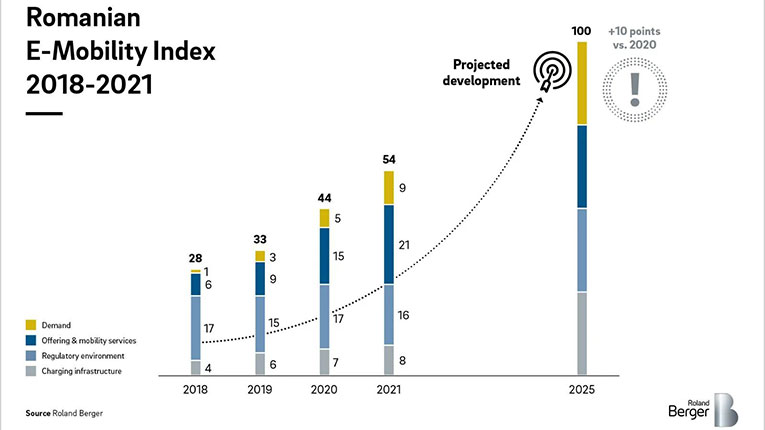 Romania continues to show a strong upward trend in sales of electric propulsion vehicles, with a number of 8,893 new purely electric (EV) and hybrid plug-in (PHEV) vehicles registered in 2021 – an increase of 131% compared to 2020, reveals the study “Romanian E-mobility Index (REI 5), conducted by Roland Berger.

The share of electric vehicles in the total number of new car registrations almost doubled in 2021 compared to 2020, reaching a new record of 7.3%, which places Romania in front of countries such as the United States, Japan and South Korea. However, Romania remains below the major markets in Europe (which reached an average level of 18% over the same period) in terms of the share of electricity registrations, say the study’s authors, Szabolcs Nemes, partner and Dragoș Fundulea, director at Roland Berger Bucharest.

About 1 in 3 car models available in Romania is electric

Major manufacturers are diversifying their portfolio of electric-powered vehicles and launching PHEV variants of popular internal combustion models, as well as new purely electric variants. Thus, the local supply increased by about 30% compared to 2020, reaching a total of about 125 electric models (EV and PHEV). Dacia Spring was by far the most popular model in 2021, accounting for almost half of all EV registrations, despite its relatively late launch, with the first deliveries in October. In the PHEV segment, SUVs and top of the range are the majority of new models.

Szabolcs Nemes, Partner at Roland Berger Bucharest, says that the transition to alternative fuels is becoming more and more accelerated and obvious. Decarbonisation is one aspect that every company is beginning to include in its strategy. The energy context further amplifies the need to limit dependence on fossil fuels, while consumers are moving more towards more sustainable products and services.

The offer of alternative mobility services, decreasing for the first time after 4 years

In contrast, the supply of alternative mobility services has declined for the first time since 2018, as the pandemic crisis and legislative challenges have pushed some players out of the market, leading to a strengthening of the remaining position.

The implementation of the recharging infrastructure has slowed down

The proportion of fast stations is constantly growing: they have come to represent 1 in 3 existing stations. The development of the ultra-fast ones (with charging speed> 150 kW), non-existent in Romania before 2020, is booming, but their number remains limited (about 1% of the total), especially due to the currently reduced needs for very high charging speeds and the costs associated with such stations.

Planned funding initiatives, such as the National Resilience and Recovery Plan, are expected to stimulate the growth of the charging station market in the coming years, especially supported by public authorities. Today, independent traders (such as supermarkets) remain the dominant category in charging station infrastructure.

Increased appetite for more sustainable vehicles has led authorities to triple the budget for the government’s Rabla Plus incentive program (including an additional allocation in August) to 123 million euro. For the first time since its launch, all funds have been completely exhausted by the end of the year.

The program is expected to undergo a number of changes that should facilitate the process of erasing old, highly polluting vehicles and replacing them with electric models.

Dragoș Fundulea, Principal at Roland Berger Bucharest, says that electric commercial vehicles have become an attractive alternative to conventional ones in Romania, proving cost-effectiveness especially in urban and semi-urban areas, in instances such as the “last- mile” delivery.

Car manufacturers have already launched on the Romanian market several models of electric vans with different charging volumes and battery capacities, offering for some a range of over 300 km with a single charge. The analysis of the study focused on commercial vehicles with typical volumes of 10-20 cubic meters and payloads of up to about 2,000 kg.

With more launches planned for the next period and increasing pressure on internal combustion models, electric UVs may prove to be a suitable alternative for commercial operators.

Compared to commercial vehicles with internal combustion, electric vehicles are more efficient in typical urban or semi-urban use scenarios (ie an annual turnover of up to 30,000 km), often driving at low speeds and having frequent stops. Therefore, the total operating cost (TCO) of an electric utility vehicle operating in such a scenario is similar to that of a diesel-powered equivalent, even if the purchase price is currently higher for the electric model.

In addition to improved energy efficiency and lower maintenance costs, an important role in achieving a similar total operating cost is played by existing government incentives, which reduce the base price by 12-18%.

previousEuropean Parliament adopted a resolution on a total embargo on gas and oil imports from Russia
nextGreenpeace: EU taxonomy will keep us in the age of fossil fuels