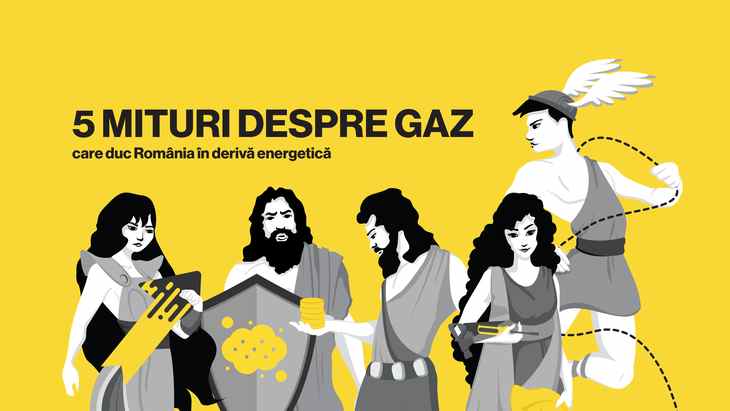 Greenpeace Romania and Expert Forum launched a critical analysis of the main arguments invoked by decision-makers in Romania supporting the expansion of fossil gas use. The document written by Otilia Nuțu, an energy expert, questions how realistic Romania’s plans are related to gas investments and identifies viable alternatives.

In the midst of the energy crisis, generated primarily by the limitation of access to Russian gas, the voices of Romanian officials who must find solutions say the same thing: more gas. The authors of the analysis state that “investments in gas power plant projects and expansion of the distribution network prove to be inopportune”. “The official approaches ignore the current reality and continue to be based on a series of myths that portray fossil gases as the optimal solution for the energy transition in Romania”, summarizes the authors of the analysis, in a press release. According to them, the right question for Romania is not how much the gas infrastructure will expand, but how and when it will succeed in eliminating it from the energy mix.

Here are the 5 myths addressed in the analysis, which “risk derailing the transition to green energy in Romania and which bring increased energy security risks”:

Myth 1: Coal must be replaced by gas because green energy is intermittent. Fake! The intermittency of renewable energy and variations in demand can be solved by storage, smart use of grids and flexibility of demand.

“The reality is that gas production in Romania is declining rapidly, that new and significant deposits are far from entering the market, that replacing coal or other fuels with gas without new production risks increasing our dependence on imports” – Otilia Nuțu, public energy policy analyst at Expert Forum

Myth 2: Gas supports decarbonization in electricity and heating, being only a transition fuel. Fake! Gas investments have long life cycles and lock us into technologies and infrastructure incompatible with the green energy transition.

Myth 3: Gas provides more energy security than renewable energy. Fake! According to the figures, the contribution of a new exploitation of gas fields is limited and cannot ensure long-term energy security.

“We have to tell the truth, the role of gas will become marginal in the coming years and we need clear plans from now on to completely eliminate it from the energy mix on the horizon of 2035” – Alin Tănase, Greenpeace Romania campaigner

In conclusion, the authors of the analysis recommend “the urgent reconsideration of the plans to increase gas consumption, the redistribution of money allocated for the development of gas infrastructure, and the acceleration of investments in electricity from renewable sources”.

The analysis can be read in full HERE.