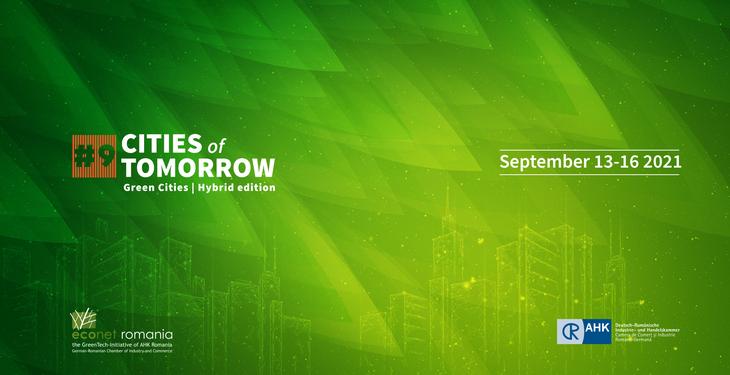 The Romanian-German Chamber of Commerce and Industry (AHK Romania) organizes the new edition of the Cities of Tomorrow conference, dedicated this year to green cities. The event is scheduled between September 13-16, 2021 and will take place in hybrid format. On the 13th, 14th and 15th of September there will be three round tables a day (online), and on the 16th of September the will be the main event at AHK headquarters in Calea Griviței no. 82-98, Bucharest. The conference will be bilingual, Romanian-English, with simultaneous translation.

Cities of Tomorrow #9 brings Green Cities at the forefront of the discussion and raises the question: what does the city in which we want to live look like? What makes life in our city worth living and how can we increase our economic competitiveness while also increasing the quality of life for citizens? Healthy & resilient societies depend on giving nature the space it needs. Important urban poles in Romania will have to catch up to EU regulations demanding minimum 26 sqm of green space per inhabitant, after a century of constructing and developing built areas.

Local public administration authorities have the obligation to keep records of green spaces and update them regularly, by establishing a local register of green spaces. In practice, the numbers contained in big cities’ registers are disputed and outdated. Citizens of large cities in Romania benefit from less than half the recommended green space (~10 sqm/ inhabitant), whereas at the beginning of the XXth century Bucharest, for example, could be considered a garden city, with more than 60% green spaces. Medium and small-sized cities have more green areas available, often from the remnants of their industrial past, which, if conversed into functional public green spaces, will offer a much-needed revitalization of these cities’ economies. Now is the time to think it green!

Already at its 9th edition, the yearly conference Cities of Tomorrow is an established platform for dialogue between public and private actors.

The nine thematic roundtables will take place online, between 13 and 15 September (three consecutive roundtables per day). You can get involved and participate in the roundtables you are interested in to interactively discuss and identify problems and solutions.

Your insights and conclusions will form the basis for future action!

previousCE Hunedoara: The program of the Paroșeni power plant, reduced to a few days a week
nextEnel sells 50% of Open Fiber for 2.65 bln. euro