Theodor Livinschi, partnerg-i: Rising prices can be managed with openness to new solutions 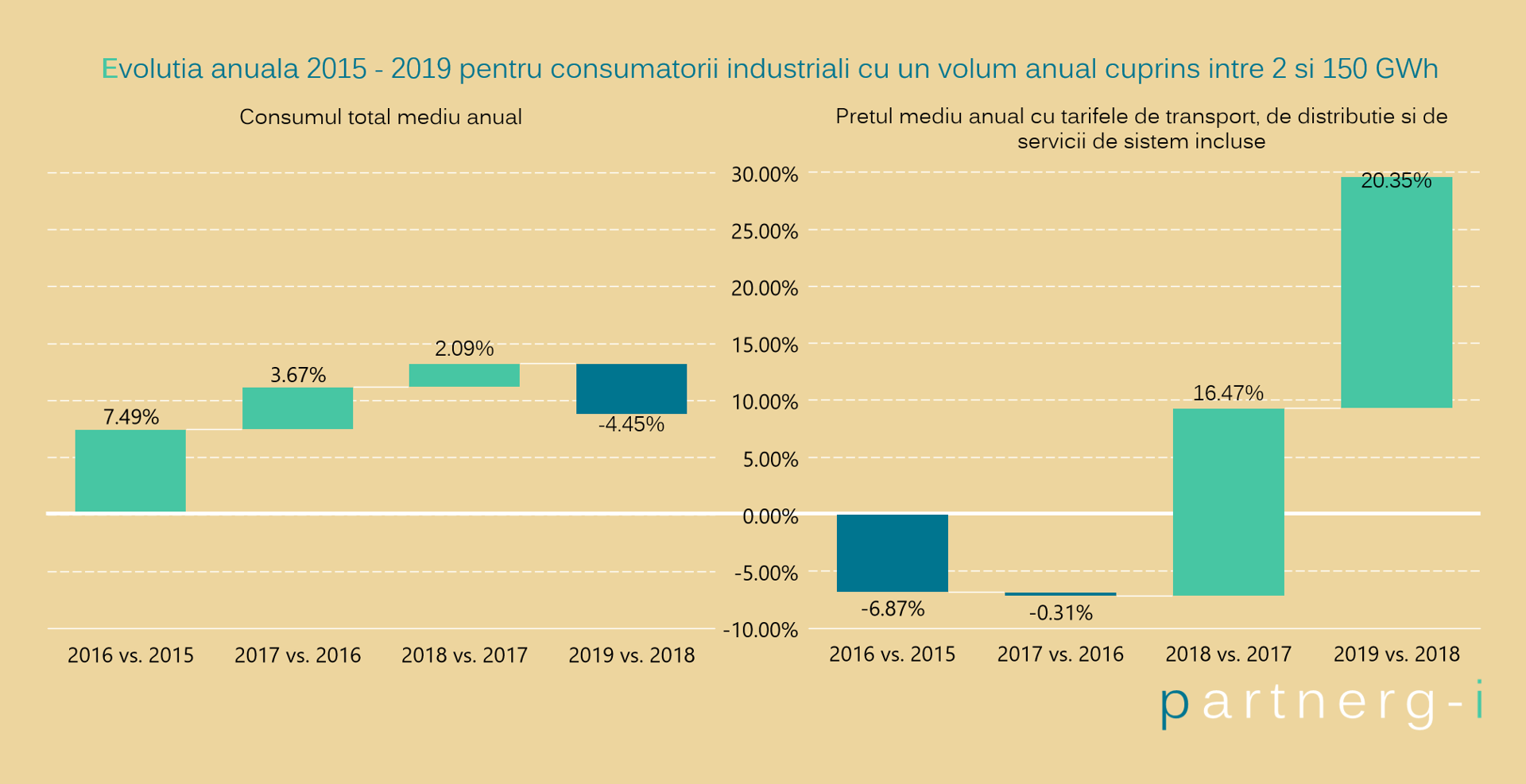 The general evolution of the volumes of electricity consumed by legal entities at national level between 2015 and 2019 indicates an increase of 10%. Every year in this period there was an increase in total consumption compared to the previous year, except for 2019, when the volume of electricity decreased by 2%.

Analyzing the consumer segment, for which partnerg-i considers profitable to contract specialized consulting services, respectively 10-500 GWh per year, in the ANRE ID, IE and IF categories (2-150 GWh per year), but without distort the data with the values related to extremely energy-intensive consumers, we present the graphic, interpretation and conclusions developed by the partnerg-i on the 2015-2019 evolution of the annual values of total consumption and price for these 3 categories.

“After consecutive annual increases for 3 years in a row between 2015 and 2018, there was a significant decrease in 2019 compared to 2018. This cannot only be attributed to energy efficiency measures, but is a consequence of the accelerated increase in electricity costs , which determined low competitiveness and the relocation of intra-group orders in the case of many production units in Romania which are part of international groups, as well as of the decrease in production and consumption of electricity, respectively, in the case of Romanian plants. Another consequence was the closure of some industrial production facilities”, concludes the founder of partnerg-i.

The advance of the average annual price in 2019, by over 20% compared to the level of 2018, added to the increase in 2018, 16.47% compared to 2017. Cumulatively, the increase of prices by about 40% in just two years can support the argument set out above with on the reasons why the electricity consumption of the analyzed consumers decreased in 2019.

The decrease of electricity consumption, registered in 2019 compared to 2018 for the ANRE ID, IE and IF categories (2-150 GWh per year), which are the object of the analysis performed by the partnerg-i, is not in line with the general trend of volumes consumed, considering that their values for the other 4 ANRE categories (IA, IB, IC and IG) were 19,904 GWh in 2019, respectively 19,912 GWh in 2018, recording a negligible decrease of only 0.04%.

The experiences of Theodor Livinschi in relation to energy consumers have helped him to identify two main directions for improving approaches that may jeopardize the performance of energy acquisition processes:

“I had the opportunity to conduct trade dialogues on electricity or natural gas supply with over 1,000 companies, 14 of which in the top 20 most important energy consumers. Depending on the organization of these companies, discussions were held with different people, both in terms of specialization and seniority or function, collaborating with general managers, CFOs, procurement coordinators or energy managers. In most cases, we have identified an important desire to improve the understanding of the energy market.”

Last but not least, the founder of partnerg-i considers that the number of consultants engaged in supporting local decision makers is low, especially in the context in which the available time resources for getting updated on the energy market are almost non-existent and represent the most often the main reason for the low efficiency of procurement processes.

The founder of partnerg-i believes that the impact of rising prices, which have led to lower industrial consumption, can be mitigated and managed by constantly informing and more openness from companies to new solutions, involving the careful choice of time of purchase, segmentation of the contract period, the configuration of open positions, the purchase in installments or on order, the security of contracts or the evaluation of the opportunity to install its own electricity generation capacity.