The next steps needed for solar manufacturing in the EU 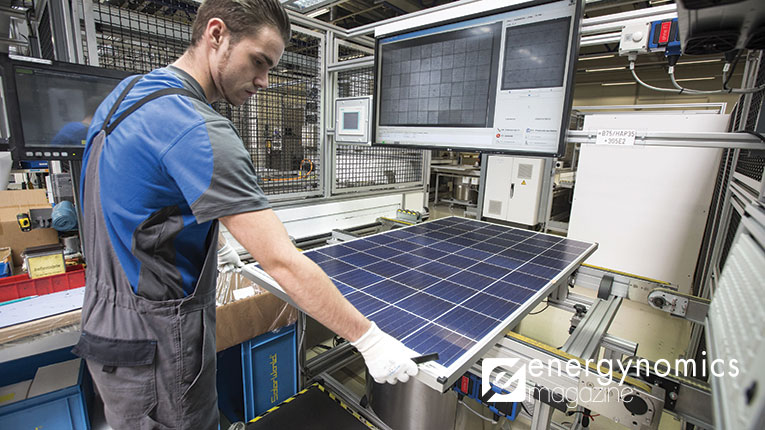 We’ve seen several key successes for the European Solar Initiative in the last 12 months, told Naomi Chevillard, Senior Policy Advisor at SolarPower Europe. However, “now we need to take the next steps”, she said. In this respect, a public consultation aiming at gathering feedback is open until the 12th April 2021. Redeveloping solar PV manufacturing in the EU will require reworking the whole silicon value chain, from polysilicon production to module assembly, underscored Naomi Chevillard.

The European Solar Initiative aims to redevelop 20 GW of solar manufacturing in Europe by 2025. What are the main developments in the past 12 months? 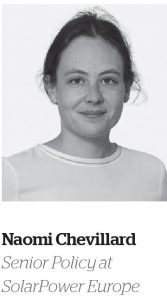 We’ve seen several key successes for the European Solar Initiative in the last 12 months. First of all, political support has become clearer and clearer. The European Solar Initiative was included in the revised European Industrial Strategy in May 2021 and the second in-depth review of Europe’s strategic dependencies in February 2022. The revised Industrial Strategy also acknowledged the strategic importance of solar PV as one of the 14 key industrial ecosystems for the EU.

In October 2021 the European Commission report on “Progress on competitiveness of clean energy technologies” notes that the industry is “growing with unexpected speed” and recognizes the EU’s global leadership in various parts of the value chain, including R&D, polysilicon production, and equipment for PV manufacturing. European industrial projects have continued to materialise on the ground. In May 2021, Meyer Burger opened two production sites in eastern Germany with annual production capacity of 400 MW of cells and modules. Saules technologies in Poland, and Oxford PV in Germany, have both opened their pilot lines for tandem solar cells, an advanced PV technology.

Solar manufacturing has also been recognised by the EU’s first Innovation Fund call, with Enel Green Power awarded financial support for the 3 GW scale-up of its bifacial heterojunction factory in Catania. And many more projects are in the pipeline.

Now we need to take the next steps. The decision to develop the first EU Solar Strategy, giving a landmark opportunity for industry to underline the importance of solar manufacturing in supply chain resilience, is key in that regard. A public consultation aiming at gathering feedback is open until the 12th April 2022.

Are there any specific instruments to support the industrial ecosystems for PV in the EU?

Solar PV manufacturing needs investment support, and fast. There are instruments at EU level that can be leveraged. The InvestEU fund managed by the EIB should aim at making strategic investments in Europe. The EIB and Invest EU must have a clearer mandate to support industrial reinvestment in solar PV manufacturing. The recent Chips Fund using InvestEU funding is a perfect example of what can be done at that level.

There are other funding opportunities such as the Innovation Fund, financed from the increasing ETS revenues, or Horizon Europe. Finally, the EU Recovery and Resilience Facility has been created to support the national governments to reinvest in the technologies of the future and should allow governments to design support mechanisms for PV manufacturing.

However, the climate crisis, and geopolitical instability, require a specific investment instrument for PV manufacturing, that would give a clear political signal and ensure manufacturers have fast access to capital. Solar manufacturing will require a substantial Solar Fund to leverage the 8 billion funding needed to reinvest into a 20 GW manufacturing capacity, euros.

What are the products/equipment/raw materials Europe mainly imports now?

Today, Europe imports most of its PV modules. However, the technologies are developed in Europe, with our continent being in the top 3 technology leaders in the world, ahead of the US and China.  Notably, Europe also has quite a strong domestic inverter industry, serving 40% of the domestic market.

For better PV deployment in Romania and in the region, better interlinked industrial facilities are needed in the region. Is there any study mapping such needs and highlighting the kind of products/equipment/raw materials to be made available locally instead of being imported from outside the EU?

Redeveloping solar PV manufacturing in the EU will require reworking the whole silicon value chain, from polysilicon production to module assembly. In addition, securing access to equipment, materials, and components, that are not produced in Europe yet (like silicon metal or solar glass) will be critical.

Such comprehensive action will require important regional cooperation, for instance with Germany producing polysilicon, with Norway which hosts ingot and wafer production capacities, and with non-EU territories where alternative materials and components could be sourced.

Are there any limits in the EU Solar Strategy with respect to getting the Western Balkans countries on board for PV industrial development?

There is no limit to getting onboard Western Balkans. The European solar industrial story will involve cooperation with our neighbours. Norway and Switzerland are already strong industrial partners to the EU solar industry. In addition, the EU has a strong neighborhood cooperation policy with industrial support instruments that could be leveraged.

What kind of incentives could be offered by central or local authorities and/or industrial park managers to encourage the building of manufacturing plants in Romania?

With the right measures, solar PV manufacturing is the industry of the future. The solar market has been growing exponentially in the past year, and must keep growing in light of the energy price and security crisis we face.

SolarPower Europe estimates that we can reach 1 TW of installed capacity by 2030, against 165 GW installed today. Investing in solar PV manufacturing will position the continent as a global leader in the technology of the future. It will create jobs across Europe, stimulate local R&D activity, and create economic added value at local levels.

Are you aware of any plans of building PV-related plants in Romania, or in the CEE region?

Right now, we are not aware of any plants in Romania, however, several project developers are still open to different locations. In the wider Central & Eastern European neighborhood, there are a number of module manufacturers across Slovenia, Croatia, Poland, Czechia, Lithuania, and Poland, with cell manufacturing present in Hungary and Lithuania too. You can see our latest EU solar PV manufacturing map in our free to download European Market Outlook for Solar Power. We invite any Romanian manufacturer to get in touch if they would like to be included in the map!

previousGreenpeace: EU taxonomy will keep us in the age of fossil fuels
nextWood instead of coal at Paroșeni