Acasă » Uncategorized » The latest issue of Energynomics Magazine is released on Thursday, June 17, at the 2021 Energy Strategy Summit!

The latest issue of Energynomics Magazine is released on Thursday, June 17, at the 2021 Energy Strategy Summit! 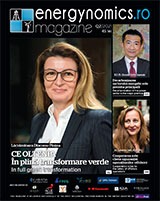 The 31st edition of Energynomics Magazine will be released on June 17th at the 2021 Energy Strategy Summit, where up to 100 of the most influential decision-makers in the Romanian energy industry will discuss the national, European and corporate strategies – after the previous six successful editions in 2020, 2019, 2018, 2017, 2016 and 2015. Check the confirmed speakers and the Agenda, and make sure you secured your place in the audience!

184 pages of interviews, analyses and opinions, fully bilingual are now available for all interested in the present situation of the Romanian energy industry. The printed edition will also be available in the next weeks and we will make sure it will reach, as it has been doing since December 2013, professionals in the energy industry in Romania, the managers of the most active companies and officials from regulatory authorities with responsibilities in the energy sector.

For them, we approach the most topical issues, from the final form of the National Recovery and Resilience Plan, with its reforms and investments, to preparations for the integration of hydrogen in the energy industry; from automation and digitalization as solutions for optimizing industrial businesses, to the commercial relations between Romania and Japan; from the energy promises of the Black Sea to electric vehicles, photovoltaic and geothermal energy. In the context of an increase in the price of carbon allowances by almost twice the projected level, CE Oltenia adapts its sales policy so as to stick within the key performance indicators provided by the budget. The complex is going through an extensive reorganization and restructuring process and is subject to constant attack by environmental organizations, which request acceleration of the coal phase-out process. ”After the implementation of the Decarbonization Plan, CE Oltenia will have new production capacities, less polluting, with lower specific emission”, claims Lăcrămioara Diaconu-Pințea, member of CE Oltenia’s Management Board. “We want to attract partners supporting this effort and we are discussing, in this respect, with banks and other companies on possible formulas of financing and/or collaboration.”

Japanese Companies could contribute to the reform of the energy sector in Romania to improve energy efficiency and decarbonization, told us H.E. Mr. Hiroshi Ueda, Ambassador Extraordinary and Plenipotentiary of Japan in Romania, speaking about his country’s path toward a green economy. “Decarbonization of the power sector is the major premise. Renewable energy will be introduced as much as possible. An electric power system will be established, the cost will be reduced, and storage batteries will be utilized to accommodate output fluctuations while maintaining harmony with the surroundings. Accordingly, offshore wind power generation industries and storage battery industries need to be nurtured as a growth strategy”, His Excellency told us.

Gabriela Dan, Secretary of State and President of ACROPO, told us that cooperation was key to the safety of offshore operations. “ACROPO has always had a pro-active approach, i.e. we did not wait to receive documentation to evaluate it, but we were open to the operators/owners to explain to them the process, what documents are to be submitted, what is the necessary format, what is the time needed for evaluation and correction”, she explained. We also discovered that Law 165/2016, under which ACROPO was created, is currently in the process of reevaluating, and also how the Authority is involved in the adoption of the Maritime Spatial Planning Plan.

previousConcordia Confederation stresses the lack of a dialogue on PNRR energy allocation criteria
nextEnel, re-included in the FTSE4Good and Euronext