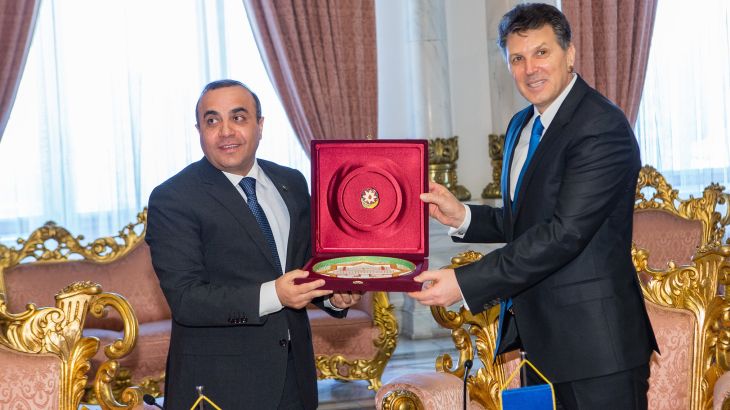 Romania’s Parliament hosted a summit between representatives of the Azerbaijani parliament and representatives of the Chamber of Deputies of the Romanian Parliament on March 17. The workshop was conducted at the invitation launched by the Romanian Chamber of Deputies of the Parliament of Romania and included a series of bilateral discussions on past and future activities between the two countries and a deposition time of memorial wreaths in Tei Park from capital at the bust emeritus of the national leader of Azerbaijan Heydar Aliyev.

The summit also benefited from the support of the President of the Commission for Industry and Services of the Chamber of Deputies, Iulian Iancu and facilitated discussions about future collaboration opportunities between Azerbaijan and Romania and strengthening parliamentary relations between the two countries .

The event brought together personalities such as Ambassador Extraordinary and Plenipotentiary of the Republic of Azerbaijan in Romania Abdinbekov Farid, head of the Heydar Aliyev Foundation’s Representation in Romania Igbal Hajiyev, Romania SOCAR CEO Hamza Karimov , Gulyev Azay and Musa Gasimov, both Azeri deputies and numerous representatives of the Chamber of Deputies of the Romanian Parliament.

In the bilateral meeting SOCAR CEO Romania Hamza Karimov emphasized the strategic nature of bilateral relations between Azerbaijan and Romania as well as the importance of developing inter -parliamentary relations that common goal in ensuring the energy security of Romania and Europe in general. He also said that: “Today it is difficult to imagine a major energy project in the Caucasus that does not include Azerbaijan as key player . Do not imagine that this position has always been like this! Everything we have done in a short period of time is due to the vision of our national leader Heydar Aliyev.”

At the end of the day and discussion rounds, SOCAR Representation in Romania organized for all delegates a formal dinner celebrating 90 years of independence Nakhchivan Autonomous Republic and Azerbaijan Novruz Bayram celebration occasion.