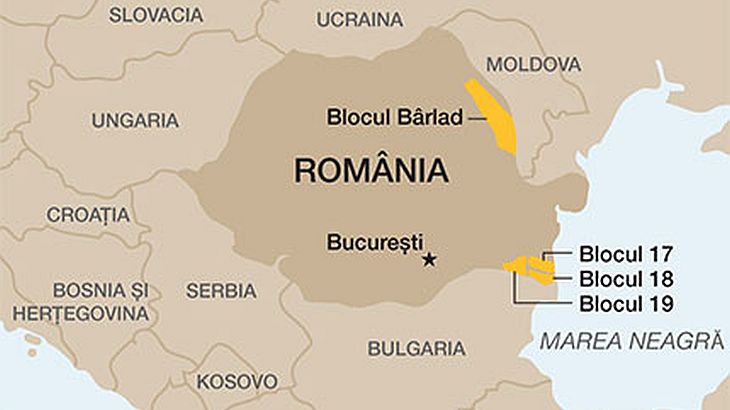 President Traian Basescu yesterday’s meeting with leaders of Western oil companies – Chevron , ExxonMobil and OMV is not at random. Lack of trust of Romanians towards the shale gas exploration has led to the blocking of conventional hydrocarbon exploration projects too , namely the classical methods used in the past 100 years in Romania.

The mistrust has blocked access to companies like Panfora (MOL) or NIS Petrol (Gazprom ) to blocks to be explored to identify common sources of hydrocarbons .

In addition, human obstacle in the way of conventional exploration and lack of education in the energy field are adding to the crisis in Ukraine, which will be resolved diplomatically or degenerate – in other words throws uncertainty over all proximity investments. And the lack of a concrete horizon usually leads to a halt in funding new projects.

Ukraine crisis, with a possible secession of Crimea, is threatening oil and gas projects offshore in the Black Sea conducted by companies such as Exxon Mobil, Shell and Eni, according to a Bloomberg analysis.

Crimean parliament voted last week separation from Ukraine and joining the Russian Federation, by calling a referendum on Sunday, March 16.

“Exxon and Shell are in a legal impasse. They have an exploration agreement with a government that could soon lose jurisdiction over the region,” commented for Bloomberg Chris Weafer, partner at Macro Advisory, Moscow.

Exxon bought the rights to Skifska block off the coast of Ukraine after the discovery in 2012 of the Domino deposit, in Romanian territorial waters.

OMV Petrom and ExxonMobil announced in 2012 a significant gas discovery in the Black Sea, preliminary estimates placing the deposit of natural gas at 42-84 billion cubic meters, equivalent to 3-6 times the annual consumption of Romania.

Andrew Swiger, ExxonMobil senior vice president, said in a presentation to investors that the group is still interested in obtaining licenses for exploration projects in the Ukrainian sector of The Black Sea.

And Exxon seems confident in quick resolution of the conflict in Ukraine.

Yesterday, Romanian president Traian  Basescu met the  Vice President of ExxonMobil Exploration Company, Johnny L. Hall, and general manager OMV- Petrom, Mariana Gheorghe , who informed him about the arrival in Romania in the coming months of a new drilling platform in the Neptune zone.

During the discussions, Traian Basescu said ExxonMobil and OMV Petrom experts that when doing analysis regarding future domestic gas resources to be exploited in the Black Sea to take into account not only Romania but also the Republic of Moldova, as our country has made ​​a commitment to provide for the gas needs of the Republic of Moldova , reads a Presidential Administration release quoted by Mediafax.

Chevron will have to become more “friendly”

The conflict in Ukraine seem to justify fears of Russian supremacy over regional oil production and export. In the new context, Romania will have to reconsider their long-term policies and take measures to enable the acceleration of exploration and exploitation of resources, whether conventional or not.

One of the solutions offered by experts is extension of the easement rights, and the payment of rent by owners.

“Extending the easement rights requires legislative changes by which the easement rights over land needed for access in the perimeters of exploration and exploitation, as stipulated in paragraph (1), Article 7 of the law of oil and mines, to expand over the land necessary for exploration works , maintaining the other provisions of the two laws, which provide for the payment of an annuity to land owners affected and respecting the principles of equal treatment, equity and the smallest harm to ownership ,” an energy specialist told energynomics.ro.

President Traian Basescu said on Thursday that he asked the Chevron President to exercise the rights given by licenses issued by the Government, in a “friendly” manner with local communities.

“It was my plea to President of Chevron to exercise the rights given by licenses issued by the Government, in a friendly manner with local communities. This is the meaning of the message, we need more discussions with local communities, that employees in local communities must be engaged, we must select students from the University of Iaşi, if we refer to the Vaslui area. So in this direction were held talks,” said Basescu .

The existence of exploitable quantities of shale gas should be firstly confirmed and then a solution is needed that would allow for the locals to receive a share of operating profit of these resources, said former U.S. ambassador Mark Gitenstein.

“If I was a Romanian, and I`m a Romanian-American, I would like to know if there actually exist any exploitable shale gas resources. Before opening the debate about hydraulic fracturing, is there enough shale gas here to count? Is what I`d like to know,” said Gitenste in a ProTv debate.

In search for a solution to ensure independence from external resources, Romania could speed up the prospecting and exploration, which is otherwise harmless to the environment if both types of hydrocarbon -conventional or shale. And the conflict in Ukraine and a possible new maritime boundary will accelerate this process. All in Romanians` benefit that could benefit not only from rents from easing the access to their properties, but also from cheaper energy produced without political complications.