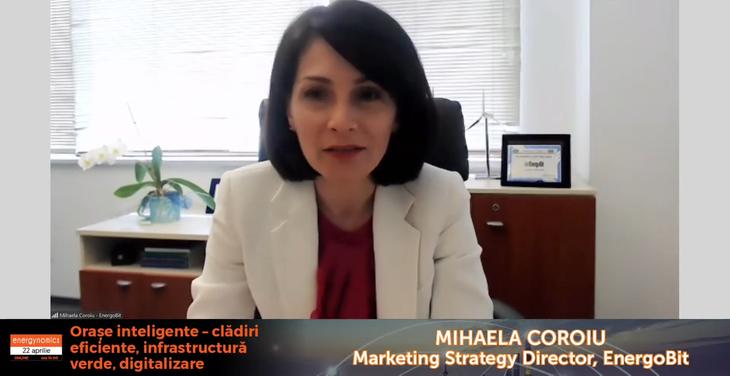 For the private sector to start real decarbonisation projects, it needs a favourable political and economic climate, predictability, a constant dialogue with decision-makers, in which to take into account the needs of consumers. Medium and small projects can provide indicators at the level of a large project, bringing results earlier and cheaper, is the idea underlined by  Mihaela Coroiu, Marketing Strategy Director at EnergoBit, at the “Smart cities – efficient buildings, green infrastructure, digitalization” conference, organized by Energynomics.

In the context of the European Green Pact and under the pressure of the commitments assumed at the level of the European Union in the perspective 2030 – 2050, new challenges appear both for the energy sector and for the final energy consumers. To achieve in due time the pollution reduction targets set with the European Commission, Mihaela Coroiu believes that Romania should pay more attention to the potential of multiple medium and small projects that can be replicated in this field, not just focus on the big ones.

“In our experience, a large energy project requires a preparation period of up to 2 years and an execution period of 3-5 years. It’s time to look at stimulating smaller projects with shorter implementation times, with more accessible budgets, to deliver results earlier, in 2024-2025, as Cluj-Napoca City Hall does. The large mass of the population can contribute to reducing emissions, to security and continuity of energy supply, to increasing the security of the national energy system (SEN), including maintaining and securing jobs,” says Mihaela Coroiu.

Our country has a stated commitment to be fulfilled in the energy transition with the year 2025 and climate neutrality until 2050; however, these large projects will be difficult to implement in the next four years.

As a solution integrator, EnergoBit offers customized solutions according to the real need of the consumer, summing up maximum benefits. Referring to the company’s plans in the green energy sector, Mihaela Coroiu stated: “We are in the design phase of 3,000 MW of installed power in renewable energy projects, mostly photovoltaic (2,000 MW), but also wind (1,000 MW). The next period will bring the second wave of development of renewable energy investments, and access to non-reimbursable European funding will certainly be an accelerator.”

The company carried out projects of over 2,000 MW in the previous wave, which started in 2008, Mihaela Coroiu recalled. “We are ready not only for big projects but for everything that means an energy transition in Romania. In our country, senior engineers collaborate with the new generation of engineers captivated by the internet, IoT, blockchain, artificial intelligence.”

Reducing gas emissions is mandatory, the first step to be taken is to reduce losses in energy installations and maximize system performance, but energy consumption must not necessarily decrease, said Mihaela Coroiu. “In Romania, we want to bring power in non-electrified areas, we want a solid economic development, and then rather focus on ensuring clean energy. Smaller plants, distributed regionally, will be able to accumulate a slightly flatter production curve, and lower installed powers can be better managed in the network. The most important thing: locally produced energy can cover the region’s self-consumption or needs. We need to motivate and support consumers to gain access to this status as a prosumer, but we still have work to do to ensure easier access to finance.”

The challenges of a smart city are multiple, said the EnergoBit representative. “We have worked on projects to increase performance in public lighting, using efficient digital systems for optimization and control; at green energy production plants for self-consumption or with a scenario for grid injection, we have our own range of solutions for energy management – ZEUS range. In terms of electric mobility, we have designed our own integrated solution, which includes the substation manufactured by EnergoBit with fast and ultra-fast charging stations for electric vehicles.”