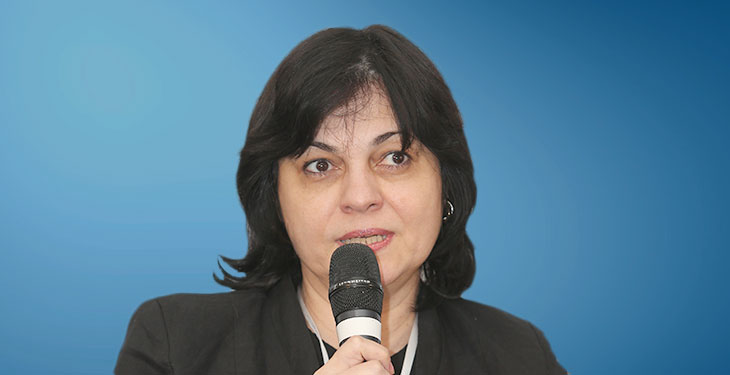 For several years now, the traditional business model of the utility provider appears to be in the spotlight in the US and developed Europe. Technological developments, the emergence of new players and the perspective of turning consumers into producers of electricity and heat are all factors that require a change of perspective from large utility companies. Silvia Vlăsceanu has been, for years, one of the authorized voices of ACUE Employers Federation which brings together the largest players on the market of electricity and gas generation, distribution and supply in Romania. We tried to find out what the situation in Romania is and what are the great currents or undercurrents that influenced this market.

Dear Mrs. Silvia Vlăsceanu, are we in a new era of innovation and business redesign?

Even if it doesn’t look like it, this industry is also very alive, and the business model development, in order to keep it connected to the current dynamic, is largely based on investment, particularly in research and innovation. Let’s remember that back in 2004, when this industry was about to be privatized, we were not only talking about supply and distribution, but also about generation. Perhaps, if this vision was followed more firmly, things would have been better in generation as well. The ACUE Association was established in 2007, after the privatizations, as a professional association. Setting up a strong dialogue with the unions was one of the initial objectives, which required the transformation of ACUE into an employers’ association. We are now more than that, we are a reliable partner of regulators and of all ministries with responsibilities in the energy sector.

What are the common points where ACUE members meet the central authorities, the regulators and the public opinion in general?

The most recent actions are related to the dialogue with ANRE in the process of liberalization and compliance with the natural gas market schedule. This market is not highly competitive, at least not to the same extent as the electricity market. The regulator prefers to discuss with ACUE, not with one player or the other. We are now talking to ANRE about determining the technical condition of networks in the entire country and we are in the process of selecting of an independent consultant to make available a summary research to ANRE. This is information that the regulator needs at a later stage to assess the investment programs of each operator.

We are carrying out clarification discussions with a different institution – the Romanian Bureau of Legal Metrology (BRML) – whom was largely overlooked by ANRE when the latter issued regulations. Specifically, we are talking about the electricity and gas meters and about the fact that they need to be checked against criteria that correlate to those ANRE established via regulations. There was no communication between ANRE and BRML until recently. We managed to put the two institutions in contact in order to get to a more consistent approach. Sometimes, the wording is different in the technical review performed by BRML and in the ANRE interpretation, catching operators and consumers in the middle. There are cases that were settled in court, and the ANRE expert report tended to prevail in front of judges. Things are now starting to change and the regulator has eventually reached a conclusion that these matters should be clear for everybody.

With the liberalization of energy markets and with the expansion of the types of services offered, competition between ACUE member companies seems to intensify. Are there points of disagreement between the members, taboo topics that are not addressed in the Federation’s regular meetings?

Competition matters are not discussed in ACUE. There are plenty of topics of common interest, such as the talks we have right now on changes to the energy law. Many people, in particular suppliers, focused on article 23 (regarding on how the electricity transactions are conducted on the market, e.n), which is not of particular interest to us. It is true that the market is not perfect, provided that PZU has a larger weight than it should have. The universal service is one item that is of great interest to us, as we see universal service as a right, not as a supply service. What does this mean? It means a set of contractual terms and conditions that need to accompany every client – either an individual or SME client – in each relationship with its supplier, whichever the type of supplier.

There should be a definition in the law obliging all suppliers to provide the same set of services and conditions.

Yes. There are cases now when a client changed its supplier and the latter, who was established when the market had already become competitive, believes that the provisions valid for providers of last resort do not apply in its case. What we want is for a supplier attracting a client to undertake the obligations attached to the universal service, namely provide electricity under the same reasonable, non-discriminatory quality conditions, as provided by law. To establish a client service center, perhaps not on a radius of 50 kilometers, as the law provides right now, but in a formula allowing clients to submit complaints or request clarifications. We are interested to define the universal service and the manner of selecting providers of last resort. Currently, definitions are unclear and allow for different interpretations which ultimately affect consumers. There are offers on the market which omit to say certain things, and the law allows it, because back in 2012, when we discussed the law, these matters were not relevant.

We are talking about something similar to the radio-TV tax. The 2004 Government Resolution according to which the radio-TV tax was collected by the suppliers who were the successors of Electrica rights and obligations only referred to the eight companies established after the privatization. Now, there are more than 100 suppliers who are not under this obligation, further to an omission in the law.

How are the distribution and supply markets affected by the storm in the production industry (insolvency or bankruptcy in the mining industry, huge, but inconstant volumes in renewable energy, etc)?

They are not affected to a great extent, as 40% of the market is still regulated by ANRE, including quantities and prices, in a basket covered by Nuclearelectrica and Hidroelectrica. And in the competitive area, the fact that we have excess production allows us not to worry about distribution and supply.

On the other hand, as a power engineer, I am watching what is happening with great concern. I understand the issues that every producer has and I believe we should maintain all types of resources in the national energy mix. Perhaps the creation of a market for capacities would make starting and stopping coal generation capacities more efficient from an economic point of view, for example.

The invoice will always be complicated for 90% of the consumers, who are uniformed about this market. You have more information, that is true, but what’s the use? The new forms arrange the many and complex information in a different way, which is similar for all suppliers. What can the end consumer do with these information? Many items are set by the regulator, based on computations that most consumers are not educated nor meant to challenge.

There are suppliers that perform linked sales now

Comparable invoices make it possible for complaints to be submitted to ANPC or the Competition Council. Some clients will find that their invoice includes the radio-TV tax or the cogeneration tax, while invoices from other suppliers don’t. They will allow the identification of suppliers that fully comply with the law and of those that don’t. We are only at the beginning of the liberalization process and there are suppliers that perform linked sales, as defined in the competition legislation. For example, they supply electricity provided that the client purchases a different product, that keeps the client captive for at least two years. And I’m not only talking about cable TV…

There are cases of abusive clauses, which we discussed in the context of the banking industry, but which I believe will be in the spotlight in the energy industry more and more often now. We have a services market where sales agents are not best qualified yet. Some years ago we proposed the idea to have something close to an energy broker as an occupation in the classification of occupations and I truly believe this is where we will go.

The full version of this article can be read in printed edition of energynomics.ro Magazine, issued in May 2016.

In order to receive the next issue (September 2016) of energynomics.ro Magazine for free, we encourage you to write us at office [at]energynomics.ro to include you in our distribution list.