Acasă » Past Events » energynomics.ro Past Events » Kurt Weber, H&P: The administrative apparatus is not ready to access 80 billion euros in European funds

Kurt Weber, H&P: The administrative apparatus is not ready to access 80 billion euros in European funds 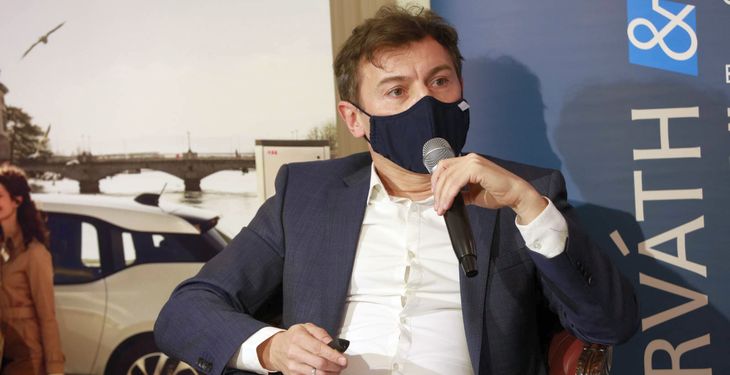 Romania has the opportunity to access European funds in unprecedented amounts in the forthcoming period, and these funds can be used to develop cities, to make them smarter, greener, more energy-efficient, more digital, said Kurt Weber, Managing Director, Horvath & Partner, at the “Smart cities – efficient buildings, green infrastructure, digitalization” conference, organized by Energynomics.

“Green deal is a paradigm that defines what kind of projects can be funded. In cities, in addition to the water, canal and energy projects – which have been worked on for years, there is a need for transport infrastructure, hospitals, etc. There are three other vectors, however, which are essential in line with the European Green Deal: decarbonization, energy efficiency and renewable energy,” Kurt Weber said.

Accessing the funds is, however, expected to pose some problems to us. “To attract the 80 billion euros made available to Romania in full, it means to increase the access capacity three or four times, it means four times more than we have managed to do so far. In my opinion, the vast majority of the municipalities, of the urban communities, are not yet ready, with the people and skills needed to generate projects and applications for funding. Many lack the strategy, the clear directions on which funding can be obtained. That is the reality; I hope the mayors and county councils have understood that money exists, but ideas, well-done projects and people are needed, in a word, we need the administrative capacity to access these funds,” Kurt Weber said.

Financing areas include the district heating area – now a rather rudimentary segment, smart zero-emission buildings, green transport and many other solutions that need to be integrated with other digital services. “If we develop a project, it must be sustainable in the long term”.