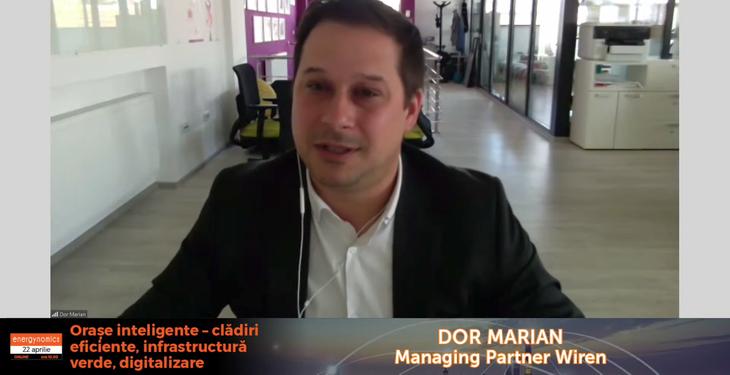 Wiren believes in sustainability and promotes solar energy and its exploitation on as many levels as possible. Dor Marian, Managing Partner Wiren, started by noticing that in recent years, technology has been cheaper, making investment more efficient. “The costs of solar technology have reached 20-25% from levels eight years ago, a completely different evolution from the prices we pay for energy. Thus, solar energy makes sense in any application and in any area where electricity is consumed. The long-term objectives are to use more and more renewable energy,” he said at the “Smart cities – efficient buildings, green infrastructure, digitalization” conference, organized by Energynomics.

In the case of electrified public transport, almost all the green energy produced can be used. On average, the green energy used by trams accounts for about 40% of the total mix extracted from the grid. “We recommend that public transport companies invest in solar power generation capacities to be delivered directly to their network so that electric vehicles use as much solar energy as possible, targeting 100%,” said Dor Marian.

Installations can be made outside cities or on the tram depots, an investment for 1 MW requiring 12,000 sqm of land or 6,000 sqm of a roof. Thus, the annual savings can exceed 100,000 euros result from the reduction od energy consumption from the grid. The depreciation of a 1 MW project happens in 5.5 years, at an amount invested of 600,000 euros, and it generates 2.75 million euro in savings during the exploitation time.

Another case study presented by Dor Marian simulates a private investment in the same production capacity and the signing of a direct purchase contract for the produced energy between the investor and the public transport company. Thus, the transport company will automatically “green” its energy consumption and will certainly have a price for energy at a discount to the market price. Cost reductions are thus accompanied by major investments in green consumption.

The representative of Wiren also mentioned other applications, such as street lighting, which can be made with photovoltaic panels and storage. Photovoltaic panels for residential use can be depreciated in about 7 years, Wiren calculations show.