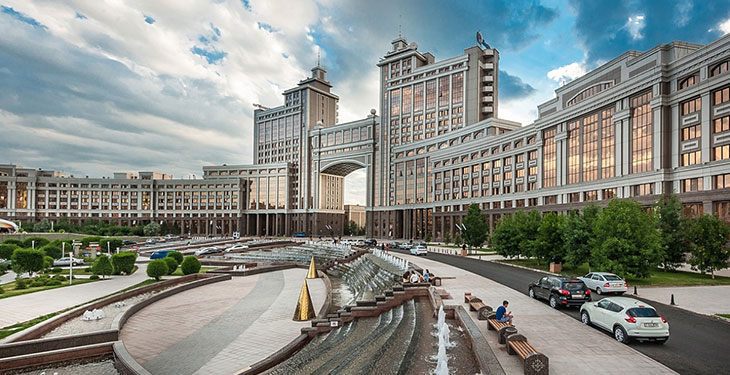 KMG International – Rompetrol group celebrates 15 years within the National Oil&Gas Company of Kazakhstan – KazMunayGas. With the support of its sole shareholder, Rompetrol continued the development of crude oil refining activities, trade with raw materials and oil products, as well as fuel distribution in the Black Sea region and Europe.

“Rompetrol takeover in 2007 represented a firm commitment of KMG towards Romania and the Black Sea region, a strategic partnership for strengthening the energy sector and expanding its presence in Europe, but also a stability factor in ensuring the supply of crude oil and oil products. In the 15 years, KMG became, through KMG International, the largest internal refiner and the most important fuel supplier for the aeronautical industry, it consolidated its position as the only producer of special products (polymers, bitumen), having also a major contribution to the national economy through the investments made, the jobs created, the contributions to the state budget and the exports in the region”, declared Ilyas Kuldzhanov, KMG International Group Chief Executive Officer.

Announced at the end of August 2007, the transaction by which KazMunayGas took over 75% of the Rompetrol Group received a favorable and final approval from the European Commission on November 19. In June 2009, the company also takes over the remaining 25%, thus becoming the sole shareholder of the Rompetrol Group (currently KMG International).

In the 15 years of presence in Romania, KazMunayGas and KMG International have concentrated their investments on modernizing and increasing refining capacities, maintaining and diversifying the products obtained, developing and securing the supply chains of raw materials and transfer of oil products, but also on expanding and aligning Rompetrol gas stations in the region with new trends and technologies.

The refining sector in Europe recorded a significant decrease in the number and processing capacities between 2007 and 2022, both due to the financial crisis, the investments required for updating technologies to align with the new environmental norms, as well as the evolution of the demand for oil products. The demand in the EU recorded a decrease of about 10% in 2009 – 2014 (in particular, the demand for fuel oil and gasoline), a slight increase in 2015 – 2019 (mainly as a result of the increase in the demand for diesel, gasoline and kerosene), a decrease of 12% in 2020 – a consequence of the Covid-19 pandemic and subsequently, an increase of 4.5% in 2021 (relaxation of Covid-19 restrictions, resumption of activities).

Under these conditions, KMG International’s efforts aimed at keeping the production units in operation in Romania (Petromidia Năvodari and Vega Ploiesti refineries), but also their development – from a nominal capacity of 3.5 million tons of raw materials in 2007 to over 5 million tons in the present, from the production of Euro 4 fuels to exclusively Euro 5, alignment with BAT (Best Available Technologies) and Industry 4.0 standards (cloud computing and analysis, artificial intelligence, automatic learning in production units and during operations).

Currently, Petromidia Navodari refinery is the largest profile unit in Romania and one of the most modern and complex in the Black Sea region. It has a Nelson Complexity Index of 11.4 and processes high sulfur crudes, with the highest white product yield in the region (85%) – 9th out of 250 refineries in Europe and Africa (Wood MacKenzie 2015).

With a processing capacity of 350,000 tons of raw material/year and a history of over 117 years, the Vega Ploiesti refinery has consolidated its position on the domestic market as the only producer and supplier of special products obtained exclusively from semi-finished materials delivered form the Petromidia refinery (hexane, ecological solvents, white spirit, light liquid fuel, road and special bitumen).

Another direction targeted by KMGI was the restart and modernization of the petrochemical units on the Midia Navodari platform, Rompetrol Rafinare being currently the only domestic producer of polymers.

Strategically positioned on the shore of the Black Sea, the Petromidia refinery processed between 2007 and first 9 months of 2022 a total amount of over 75.5 million tons of raw materials, of which about 65.3 million tons of crude oil. The crude oil requirement was mainly covered from Kazakhstan – KEBCO (Kazakh Export Blend Crude Oil), through the Tengiz – Novorossiysk and Atyrau – Samara – Sheskharis/Novorossiysk pipelines. It has the ability and flexibility needed to process other types of crude oil, depending on the recipes, for obtaining oil products and the desired yields.

The evolution was also reflected at the level of the national economy, both through direct and indirect jobs (over 15,000 people), commercial partners and through contributions to the state budget (over 20 billion USD in the last 15 years). Also, the increase in the quantities of oil products obtained also supported Romania’s trade balance, through exports in a total value of about 18.3 billion USD, both to the Group’s subsidiaries, and to other traditional partners in the region (Turkey, Serbia, Greece, etc.).

KMG International carries out extensive supply and trade activities with oil products in the Black Sea region, through Rompetrol depots and gas stations in the Republic of Moldova, Georgia and Bulgaria. Through the investments made and the continuity of product assurance, Rompetrol is the largest supplier of fuels in the Republic of Moldova and Georgia and one of the most important in Bulgaria.

The consolidation and development of Rompetrol’s presence in Romania was also reflected in the expansion of fuel distribution points and the volumes sold by Rompetrol Rafinare and Rompetrol Downstream – the retail division of the Group in Romania. For example, the number of sale points tripled between September 2007 and September 2022, from 376 to 1,235 (own stations, partner stations, mobile stations: express, internal bases).

At the regional level, the Group emphasized the expansion of Rompetrol’s presence in the trading area with petroleum products and retail – the wholesale and retail distribution of automotive fuels, but also the expansion of the Fill&Go service, the implementation of the new station concept, the expansion of the shop & gastro area, the sale of Euro 5 fuels. The network of stations operated in the Republic of Moldova, Bulgaria and Georgia increased, from 90, to around 220 units, the operations being supported by 7 local fuel depots.

“In the current context, we take our role responsibly, but we look into the future with confidence, and we want all the projects developed in the last 15 years to contribute to a sustainable development of this industry. We have extremely well-trained specialists, we have a solid platform of assets, a shareholder who is with us and supports our initiatives, and the future we want is one that many generations from now will benefit from”, adds Ilyas Kuldzhanov.

In 2018, KMG International, in partnership with the Romanian State through the Society for the Administration of Energy Participations, laid the foundations of the Kazakh-Romanian Energy Investment Fund, meant to support the development of the local energy sector. Among the projects selected so far and currently being implemented are the construction of a cogeneration plant on the Midia Navodari platform, the creation of a fuel distribution network, but also other projects aimed at the modernization and expansion of the Petromidia refinery. Their value currently amounts to around 315 million USD.