Acasă » Electricity » Enel: Improve governance opens the way for investments and ensures the achievement of 2030 targets

Enel: Improve governance opens the way for investments and ensures the achievement of 2030 targets 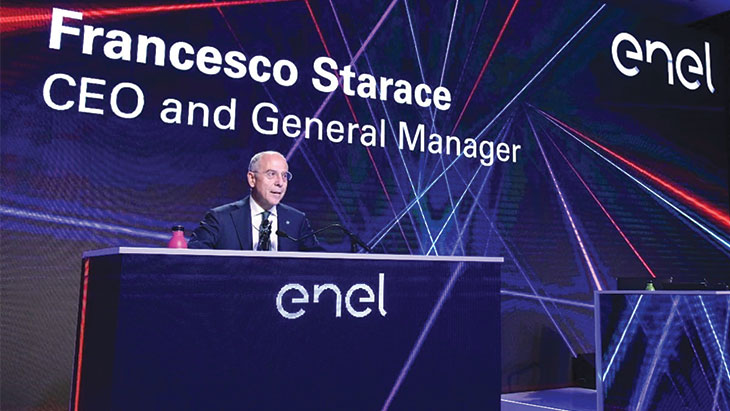 Positive impact on Gross Domestic Product (GDP) and employment, as well as various environmental benefits. Effectively managing the energy transition by improving governance efficiency is an essential prerequisite not only to ensure the energy system’s sustainability, but also to seize an unmissable opportunity to create value and employment. This is what emerges from the “European Governance of the Energy Transition” study, carried out by the Enel Foundation and The European House – Ambrosetti in collaboration with Enel. The study was presented today, within the context of The European House – Ambrosetti Forum, in a press conference which saw the participation of Valerio De Molli, Managing Partner & CEO of The European House – Ambrosetti, Francesco Starace, CEO and General Manager of Enel and Stefano Manservisi, Professor and Member of the International Independent Task Force on Creative Climate Action, Sciences Po – Paris School for International Affairs.

“The EU decision to reduce greenhouse gas emissions by 55%, rather than 40%, by 2030, compared to 1990 levels, accompanied by the recent ‘Fit for 55’ package proposal, confirms that decarbonization is at the core of building the Europe of the future,” said Francesco Starace, CEO and General Manager of Enel. “Bridging the investment gap with approximately 3,600 billion euros needed to reach the 2030 target in Europe, of which around 190 billion euros in Italy alone, would have a cumulative impact on GDP of over 8,000 billion euros, of which more than 400 billion euros in Italy alone. However, at the current pace, Europe would only hit the new 2030 target on renewables in 2043, which would be too late and a shame to miss such a great opportunity of economic value creation. It is therefore necessary to accelerate and equip ourselves with a governance system, which is adequate to the extent of the challenge and capable of translating intentions into concrete action while leveraging on the enormous opportunities that stem from this commitment.”

“The time has come for Europe to rapidly implement the energy transition, to seize the opportunity to revolutionize the perception and management methods of the entire energy sector. This sector has the potential to be the catalyst of a long-term vision for the future – potential of which European institutions are fully aware” said Valerio De Molli, Managing Partner and CEO of The European House – Ambrosetti. “Europe’s commitment has been confirmed and further corroborated by the recent ‘Fit for 55’ package, which envisages a very ambitious energy transition path for the continent. Europe will have to increase its efforts to implement this change because, at this rate, the continent would not reach the new target of reducing greenhouse gas (GHG) emissions by 55% in 2030, but in 2051, which is 21 years late. As for renewable energies, at the current pace, the new 40% target set for 2030 would only be reached in 2043. From the energy efficiency point of view, based on current levels of improvement, Europe will reach +36% in 2053 instead of 2030.”

Climate change is the greatest challenge of our time, a global threat that transcends individual state borders and has direct consequences on all our lives. Since the 1990s, the European Union has played a leading role at an international level in the fight against climate change, adopting ad hoc policies and setting very ambitious targets to reduce greenhouse gases, increase the share of energy from renewable sources in final consumption and improve energy efficiency. In the last two years, the European Commission has raised the bar and in July 2021 moved the goal of reducing greenhouse gas emissions from the previous 40% to at least 55% by 2030 compared to 1990 levels. This is an ambitious goal that over the next decade aims to consolidate the EU’s position as a global leader in the energy transition.

Investments in the sectors involved in the energy transition process would generate cascading benefits, both in Europe and in Italy, with important indirect and induced effects. In fact, the study shows that closing these gaps over the next 10 years could have a cumulative impact on GDP of over 8,000 billion euros in the European Union and over 400 billion euros in Italy.

Therefore, Europe has an unprecedented opportunity to launch investments in line with the stakes. The Next Generation EU, a multi-year plan worth 750 billion euros aimed at creating a more connected, sustainable and resilient Europe, is the cornerstone of the European recovery strategy. Italy is the main beneficiary of the Next Generation EU and has drawn up an Italian National Recovery and Resilience Plan (NRRP) amounting to around 235 billion euros, of which 30% is dedicated to the “green revolution” mission.

In the face of this great value creation opportunity and the urgency associated with climate change, the study shows that, at the current pace, Europe would only reach the new target of 55% reduction of greenhouse gases in 2051, with a delay of 21 years compared to the 2030 target. As for the other new targets set for renewables (40%) and energy efficiency (+36%), Europe is clearly lagging behind here too, as at the current rate they would be achieved in 2043 and 2053 respectively. In Italy, the NECP has yet to be revised in light of the “Fit for 55” package. The new 2030 goals for Italy are likely to be a 43% reduction in greenhouse gas emissions, a 37.9% contribution from renewable energy and an increase in energy efficiency of 46.4%. In evaluating Italy’s current performance in achieving these goals, an average delay of 29 years emerges, compared to 19 in Europe, with a delay of 24 years for renewable energy.

A rapid change of course is therefore necessary, one which puts Europe in a position to make the investments necessary to compensate for the delay accumulated over the years and accelerate economic value creation. In order to unlock necessary investments it is essential to overcome the current barriers to energy transition governance. The study analyzes the current governance structure, defined as the set of roles, rules, procedures and tools (at the legislative, implementation and control level) relating to the energy transition management, and aimed at achieving strategic as well as operational objectives. The study shows that there are three main issues with energy transition governance in Europe. Firstly, energy is a shared competence between Member States and the EU, then, there is a growing need to implement a new “indirect” enforcement system and finally, it is necessary to strengthen the new mechanism for managing green objectives. In Italy, energy transition governance effectiveness is limited by five factors, namely fragmented responsibilities among the various stakeholders at different levels, non-uniform local regulations and local application of national regulations, weak involvement and commitment of institutions and local communities eroding social acceptability, related inefficiencies in the role of technical-administrative public bodies and fragmented drafting of sectoral policies.

To overcome the challenges highlighted above, the study focused on seven proposals, divided according to whether the action area is European (in its two internal and external scopes) or Italian. In relation to the internal European scope, a strengthening of cooperation in energy transition governance is proposed, officially recognizing its critical role and adopting a regional approach to favor European market integration. In relation to the European Union’s external scope, the study proposes the encouragement of the Carbon Border Adjustment Mechanism (CBAM) at an international level and the promotion of more effective mechanisms to ensure that Nationally Determined Contributions (NDCs) are consistent with the objectives of the Paris Agreement. In relation to the Italian action area, the study proposes a simplification of authorization procedures for renewable energy plants and the promotion of activities that favor energy efficiency. It also suggests a uniform and standardized interaction mechanism for local authorities on one hand and electricity distributors (Distribution System Operators, DSOs) as well as charge point operators (CPOs) on the other, in order to encourage the development of the electric vehicle charging infrastructure. Finally, it proposes the promotion of the full integration of industrial districts and local level business clusters, innovation ecosystems and energy communities with the national distribution network.

previousRompetrol Well Services – 70 years with the Romanian oil and gas industry
nextE.ON: Most Europeans believe in a revolution of the e-mobility, Romania has 7,500 EVs