Acasă » General Interest » Digitalization » Emil Boc: Digital and efficiency are the tools of the future

Emil Boc: Digital and efficiency are the tools of the future 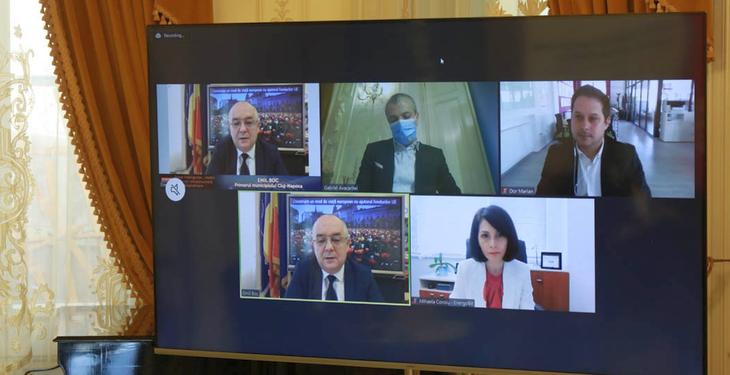 The city of Cluj-Napoca is directly connected to what is happening today in Europe, and the targets of the European Union, including The Wave of Renovations and the Digital Decade, said Emil Boc, Mayor of Cluj-Napoca, at the “Smart cities – efficient buildings, green infrastructure, digitalization” conference, organized by Energynomics.

If the current pace of renovation in the European Union is maintained, we need 124 years to reach the 2050 targets, says Boc. “Member States’ resilience plans will include a highly consistent component in this segment — public and private buildings, in the rehabilitation segment – with technologies which are green and clean,” the mayor said.

As for the Digital decade, Boc says that Cluj has already taken steps to become a smart city. “Those who will understand that these dimensions will be those of the future will be the winners,” said Boc. “We have created a strategy to maximize the growth of the city, with the main focus of the strategy on the concepts of green (renewable), digital and resilience (sustainability)”, said Boc, referring to the strategy’s focus on knowledge; Cluj-Napoca is one of the most important university centers in Romania.

”The ability to work together is the key. It is not the mayor who decides what will happen in the city; it is all about the eco dimension, not the ego!, based on a multi-collaboration, where public administration is only a component of the local ecosystem, along with citizens, the private environment, NGOs,” says Boc. “There is no obstacle greater than ego in the realization of large projects.”

In the digital strategy, Cluj follows as model countries like Estonia. “The citizen has to come to the city hall only for the birth certificate, for the marriages, for the civil status, to transfer their property. For the other activities, all must be digital,” he added.

“I think that by the end of next year we will have all the digital processes in place. We established yesterday (on April 21, e.n.) the City Hall’s Digital Transformation Department”. This will make all payments digital, and all permits will soon be digitally issued. “Since the beginning of April, I have digitally signed most documents, with a few exceptions. We are now in the process of acquiring 977 digital signatures for all officials – from the first one to the last one”.

Cluj-Napoca also aims to be emission-neutral by 2045, with the 2030 intermediate target, when it will cut its emissions by 10% and the green spaces will be increased by 15%. “We have in preparation 100 million euro worth projects for 190 hectares of green spaces.”

At the same time, Cluj-Napoca has already purchased 50 electric buses and trolleybuses through European funds and will acquire 24 trams and other vehicles until the park reaches 374 green vehicles. The objective for transport is to make the entire city fleet green – clean – by 2026. At present, only 50% of the public fleet is green. Cluj has a subway line under construction and in June it will implement “Green Friday”, a project that will allow all residents to travel free of charge on public transport.

“The Metro is a reality – we will finish the feasibility study in October, the project is one of the projects to be financed through NRRR and it can be carried out depending on negotiations with the EC by 2026, when the project must be completed, as far as possible all 16 km”. The electrical infrastructure will also be restored, including both slow and fast-charging stations. “I announce to you that we are also working on the hydrogen dimension. We can buy 12 autonomous buses, we will buy 2 this year,” said Boc.

In terms of energy efficiency, projects are based on advanced technology, with pubic lighting fully modernized by 2023. The district heating system in Cluj-Napoca is also in the process of restructuring based on renewable solutions. But for the time being, as in Bucharest, it functions based on subsidies.