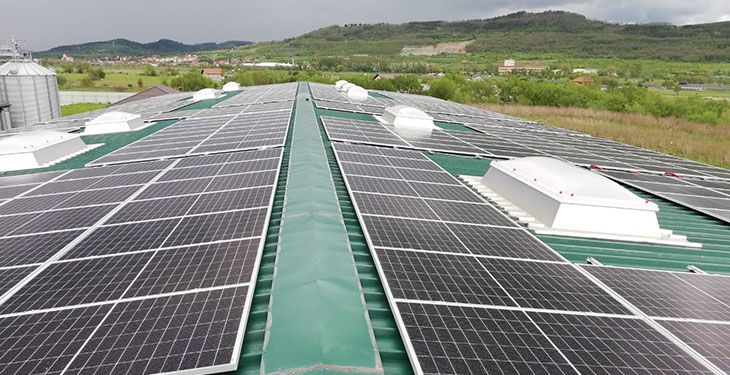 E.ON Energie Romania and Sitemani, one of the most well-known food producers in the country, have completed a green energy production project worth over 155,000 euro. The photovoltaic power plant generates 155.7 MWh annually and provides 14.35% of the annual energy consumption of the Sibiu company. Sitemani will provide 14.35% of its annual energy consumption from the green energy produced by the plant, and CO2 emissions will be reduced by about 38 tons per year, according to E.ON.

“There is a growing interest in renewable energy and we are convinced that together with our current and future partners, we will become increasingly important players in the process of transition to the new world of energy: greener and more sustainable,” says Claudia Griech, General Manager of E.ON Energie Romania.

“This project contributes to achieving the objectives of competitiveness and sustainability of our business. The photovoltaic plant provides us with an independent energy source, contributes to increasing economic efficiency by reducing electricity costs and at the same time helps us to become more sustainable. The partnership with E.ON came naturally due to their experience in building photovoltaic power plants,” says Marius Teodor Șari, General Manager of Sitemani.

The photovoltaic power plant has an installed capacity of 140.7 kWp and includes 420 photovoltaic panels installed on an area of 1,000 square meters on the roof of the company in Sibiu. The commissioning of this photovoltaic project contributes to the protection of the environment by reducing CO2 emissions by about 38 tons per year.

Starting with 2018, E.ON has built and delivered turnkey 55 photovoltaic power plants with powers between 60 – 1,600 kWp totaling 13 MW of installed capacity for 41 companies from various sectors of the economy. About 40,000 photovoltaic panels have been installed, which generate a total of 17 GWh of solar energy and contribute to reducing CO2 emissions by 3,900 tons per year.