Acasă » Electricity » D. Drăgan, Ministry of Energy – We will have a national strategy for hydrogen

D. Drăgan, Ministry of Energy – We will have a national strategy for hydrogen 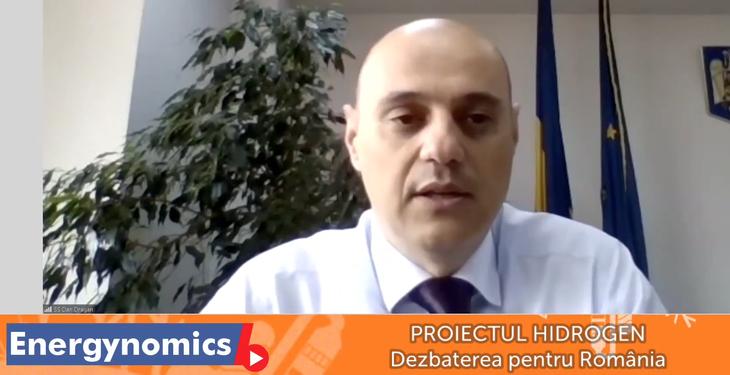 The Romanian authorities plan to implement a national strategy for the use of hydrogen in energy, industry and transport, as this resource is becoming increasingly important at the EU level in the effort to reduce carbon emissions, said Dan Drăgan, state secretary in the Romanian Ministry of Energy, during the ONLINE conference “Project Hydrogen – the Romanian debate”, organized by Energynomics.

“We are monitoring carefully the hydrogen strategies developed by other countries and we want Romania to have a national strategy to offer the necessary levers for market actors to develop in this sector”, said the state secretary. According to him, the hydrogen strategy will be drafted separately from the energy strategy, as this new resource will be used in other areas as well.

“A strategy for hydrogen at Romania level will be developed separately, where all actors will have to be involved, because we are not only referring to its use in energy but also in the industry and transport sectors, so it will be elaborated through institutional consultation and transparency. For now, there is no strategy, no road map for this field”, Drăgan continued.

He said a special service dedicated to the new hydrogen technologies would be organized within the Ministry of Energy and a first step would be to monitor the projects and intentions on the market, a move the ministry would launch in the forthcoming period.

Several companies, including Nuclearelectrica, Romgaz, Hidroelectrica and OMV Petrom, have shown interest in investing in this field.

“It is important that hydrogen production can be used as an energy storage system. Taking into consideration the new strategy and a new renewable generation capacity of 6,9 GW, we believe that there will be a significant market for hydrogen as an element for power storage. There are initiatives of companies that want to develop gas plants with an integrated vision, namely the production of hydrogen from renewable sources and the use of hydrogen in combination with gas in low-carbon electricity production”, said Drăgan.

He pointed out that, at the European level, there are industries moving toward using hydrogen. “We have seen industrial applications and I think the industry will be increasingly moving toward hydrogen. We have seen initiatives at the European level to produce green steel, replacing coke with hydrogen. In transport, we are anticipating the development in this decade and we have seen some countries that have already engaged in developing transport based on hydrogen,” the state secretary said.

According to him, all the new gas networks that will be built in Romania will be able to transport the new kinds of gas, hydrogen included. “We already have a transport network connected to those of our neighbours and it is not feasible to build another dedicated hydrogen network. As in other countries, there are projects to mix hydrogen with natural gas and I am convinced that the same thing will happen in Romania”, said Dan Drăgan. “At the same time, all natural gas networks that will be developed and put into operation in the next period will have to be able to accept non-carbonated gases, including hydrogen,” he said. The National Plan for Relaunch and Resilience provides for an initial negotiating budget of 600 million euros for the development of natural gas infrastructure mixed with hydrogen and other green gases. The modernization and adaptation of existing natural gas transmission and distribution infrastructure for the use of hydrogen and other green gases to decarbonise heating are envisaged.

It is also intended to complement the regulatory framework for clarifying relevant technical solutions and issues related to gas quality and safety requirements for the development of public gas networks in combination with hydrogen and other green gases.