Acasă » Thermo » Cristian Athanasovici, Kawasaki: We have hybrid solutions that include green technologies

Cristian Athanasovici, Kawasaki: We have hybrid solutions that include green technologies 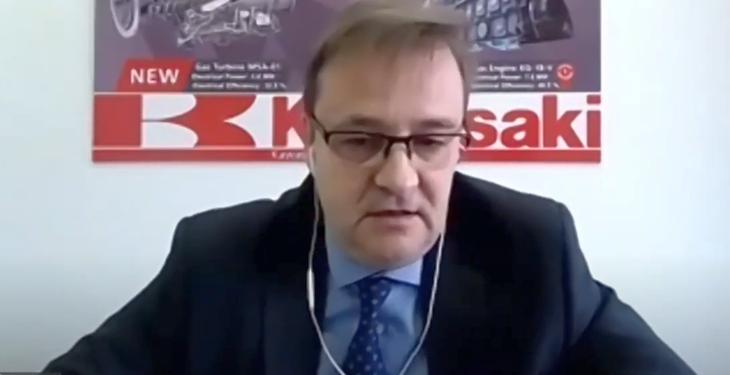 In any project, we need to take pollutant emissions into account today, and we need to have hybrid solutions that also include renewable sources.

“We have solutions already in place in Romania, both in the industrial sector and in the urban sector – in the centralized heating system. You can see an 8MW Kawasaki turbine in Bacau. Kawasaki is also interested in reducing polluting emissions and, in this respect, if, until now, Kawasaki turbines could only burn gas for energy production, for two years, our equipment can also run on hydrogen,” Athanasovici said.

“We have cogeneration solutions that can use natural gas with hydrogen at the same time, but they can also use hydrogen alone. The cost-effectiveness of such a hydrogen solution will be given by the purchase price for hydrogen.

Hydrogen is currently a strategic direction launched by the EU, but it depends on the technologies and costs of production. Green hydrogen, from water electrolysis, is free from polluting emissions. But there are other sources, we must see which of them have the lowest carbon footprint,” Athanasovici said.

Kawasaki is a global producer of energy equipment present in Europe mainly through the gas turbines and internal combustion engines division. Based on this, its equipment uses natural gas and has an installed capacity range between 1,8 to 34 MWe for gas turbines and 5.2MWe to 7.8MWe for engines.

Kawasaki developed a new engine last year, with a power of 7.8MWe, which has the highest electrical efficiency in its class – 51%. The engine was honoured in Japan by the Advanced Cogeneration and Energy Utilization Center Japan – ACEJ.

Kawasaki also developed a 100% hydrogen-powered plant of 1.8MWe in Kobe, Japan. “The results of this plant are very good and we are ready to come and replicate such a project in Romania and other places in Europe. We must ensure that the new cogeneration plants that we propose are extremely environmentally friendly, and that is why, I personally believe that hybrid solutions will soon emerge that will combine cogeneration technologies with renewable energy – i.e. solar, photovoltaic, organic cycles, as well as other solutions. From this point of view, Kawasaki is very open and we are prepared with our new equipment,” Athanasovici concluded.

The conference “Digitalization and Energy Efficiency – the 5th year – Constanța” was organized by Energynomics, with the support of our partners Kawasaki Gas Turbines Europe, Wiren Energy.

previousLiviu Popa, special administrator RADET Constanta – The solution is moving the assets to a new company
nextGiles Dickson, WindEurope: Romania needs to invest for a power grid fit for the green transition