Liviu Popa, special administrator RADET Constanta – The solution is moving the assets to a new company 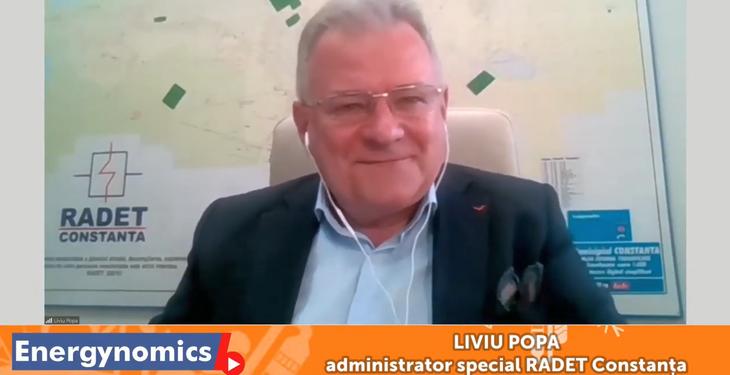 Investments in district heating systems have been minimal in recent years Many sub-systems have been dismantled and various solutions have been sought. “The best system remains the centralized one because it is a system that also diminishes the carbon footprint”, said Liviu Popa, special administrator of RADET Constanta, at the conference on digitalization and energy efficiency in Constanța, organized by Energynomics.

RADET is going through a transitional period, and the reorganization plan includes the setting up of a new company, Termoficare Constanta SRL, to whom the public services of heating will be delegated. The new company will take over the public and private assets of RADET Constanta, which is now under special administration.

“The regulations in the district heating system have generated these historical debts over time. RADET Constanta accumulated debts to ELCEN Bucharest because the sums promised from the budget over the years as a subsidy for the end-consumer was paid up to three years late. At the same time, based on the commercial contract between ELCEN and RADET, the amounts not settled in the month in which they had to be paid out led to penalties for delays. This mechanism has come to generate very high penalties – each payment would have extinguished the oldest debt, every invoice that, at one point, had reached the due deadline, was causing penalties. And the funds in the escrow account were simply extinguishing penalties,” he explained.

The solution put forward by Liviu Popa is for RADET to keep the historical debt and for the municipality to withdraw its assets.

“The modernization projects envisaged by the City Hall for the transport network are at a very advanced stage. Documentation has already been submitted for the first $20 million worth project,” he added.

At the same time, Liviu Popa is advocating for the restoration of the thermal power systems in blocks by introducing horizontal heating distribution, with metering at the door. Costs decrease as the number of participating apartments increases, he says.

”We have introduced this system in one block of flats, and the next year the consumption has dropped by 40%, and then again by 33% in similar external temperature conditions. The same results we had for hot water – which loses temperature without a recirculation plant. As a result of the introduction of horizontal distribution, consumption has fallen by more than 30% in the first year, and then by 18%.”

The conference “Digitalization and Energy Efficiency – the 5th year – Constanța” was organized by Energynomics, with the support of our partners Kawasaki Gas Turbines Europe, Wiren Energy.

previousDaniela Barbu (Ministry of Energy) on the Energy Efficiency Investment Fund, ElectricUP and ESCO projects
nextCristian Athanasovici, Kawasaki: We have hybrid solutions that include green technologies