Acasă » Oil&Gas » C. Athanasovici, Kawasaki: In the medium term, the energy mix will be based on gas, in addition to renewables

C. Athanasovici, Kawasaki: In the medium term, the energy mix will be based on gas, in addition to renewables 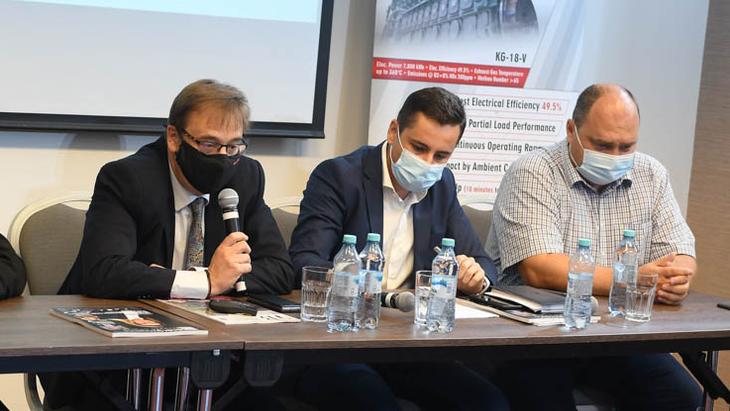 The new concept of the energy mix of the future presented by the Kawasaki representative includes both gas and renewable sources. “According to the new concept, the production of electricity from renewable sources will coexist with the use of conventional fuels, in this case, natural gas. Gas turbines and internal combustion engines will always coexist with other technological solutions – such as wind or solar farms. Such an integrated solution can be used by both a manufacturer and an energy consumer. From the classic fuel side, we have the CO2 emission that can be captured and stored or even reused, especially in industries such as food and beverages. Hydrogen can be green, based on the electrolysis of water in the wind or solar farms, and can be used in gas turbines. It’s a whole discussion about what efficiency and costs mean, – it all depends on the specifics of each case. Regarding hydrogen, I think it is a topic that in the next 10 years may appear in Romania in the form of several pilot projects, and on a large scale, somewhere in 2035”, added Athanasovici.

In the energy division, Kawasaki produces two types of equipment that are very necessary for cogeneration – gas turbines and internal combustion engines. The equipment uses natural gas and has an installed capacity of 1.8-34 MWe, for gas turbines and 5.2MWe and 7.8MWe for internal combustion engines. “We address consumers who have an average energy consumption – these industrial consumers, in particular, who have a thermal energy somewhere between 5 and 30 MWt,” Athanasovici added. “A new product in the Kawasaki range is the first 7.8MWe motor that has a very good electrical efficiency of 51% and that we recommend especially to energy producers who are thinking of doing system services.”

The targeted market segments are industry manufacturers and centralized heat supply systems. “We are involved in reducing pollutant emissions as much as possible, for the most efficient use of fuel. We use only natural gas in our equipment and, to become as efficient as possible and reduce emissions as much as possible, we come up with solutions as close as possible to the energy consumer. We are also involved in the hydrogen area, we already have equipment that can function only on hydrogen – the 1.8 MWe gas turbine”. Thus, Kawasaki developed in Kobe, Japan, two years ago, the plant that works either 100% with hydrogen or, in any mixture, with natural gas. The Japanese company has very ambitious targets to increase the share of hydrogen use in equipment – from 10 to 30%, and even at 100%.