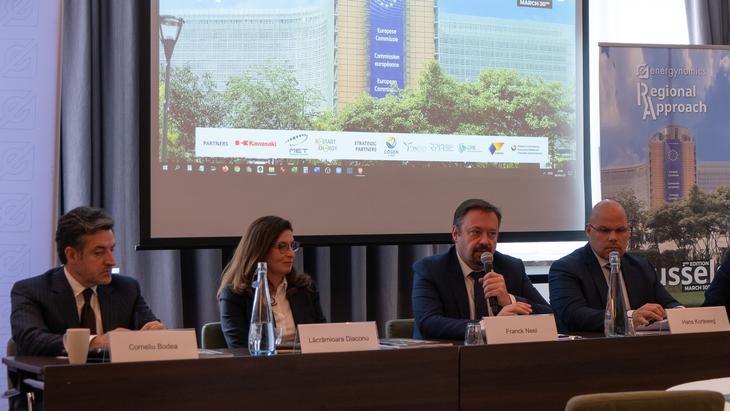 Franck Neel talked about the main pillars of the 11 billion euro investment plan of OMV Petrom’s until 2030, a very important step for the company, “but also for the energy business in Romania”, as he said. “35% of the OMV Petrom investment will go for the energy transition”, highlighted Franck Neel, Member of the Executive Board of OMV Petrom, at the Regional Approach Brussels conference, organized by Energynomics.

The first of those pillars is represented by the efforts meant to improve the daily business or traditional business of OMC Petrom, “because there is still need of oil by 2030 and we still have to supply customers”, said Franck Neel.

With respect to the energy transition, there are some particular areas where OMV Petrom want to invest in Romania. One is the photovoltaic projects: “We are talking about developing at minimum one gigawatt renewable capacity in Romania. It’s not just PV, but the renewable power itself and we are very pleased to be selected in this process of CE Oltenia, because it’s a way forward to accelerate our investment plan”.

There are many ideas on the fuel business, he said, but the most important investment is the one in the second generation biofuels in Romania. “This platform could really make us one of the key players in the region.”

Hydrogen is also a point of interest for OMV Petrom, but mainly after 2025. Franck Neel believes the H2 color is not important, so not the origin and the production technology is what matters, but “the CO2 content of the hydrogen”. “We do think there will be some development in Romania, we do see a potential for green to blue hydrogen, there will be also turquoise hydrogen, to respect the EU taxonomy criteria”. He mentioned the specificity of Romania – where gas can be produced offshore, it can reach the coast within very small distances, while CO2 can be produced and stored in the Black Sea or onshore – to highlight the fact that, together with the offshore wind, gas production makes sense even economically and “we can make sure that our gas production is green in terms of power consumption”.

See the photo Gallery from Bruxelles!

OMV Petrom also looks at the electrolyzers segment, a project to be positioned near the Petrobrazi refinery, because “you should start where hydrogen is used”, and OMV Petrom is already a consumer of hydrogen.

Frank Neel also mentioned, as part of the company strategy, investments in “carbon storage as a service”, geothermal “to produce electricity, not just heat”, and of course the Neptune Deep project at the Black Sea. “There is a huge demand for natural gas from the neighboring countries of Romania, and we need to diversify our supply as we will still need gas by 2030-2035”, he said.

previousGreenGroup gets 127 mln. euro with the help of Abris – the largest green funding in the recycling sector
nextBulgaria to set up first regional platform as part of the EU’s Energy Purchase Platform