Acasă » Oil&Gas » Virgil Popescu: The Offshore Law has been and is a priority for me and PNL colleagues

Virgil Popescu: The Offshore Law has been and is a priority for me and PNL colleagues 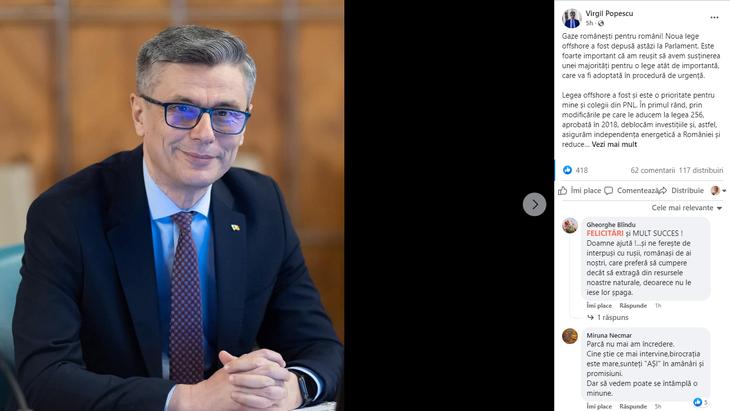 The Offshore Law was submitted to the Parliament on Friday and will be adopted as a matter of urgency, and the amendments will unblock the investments and thus ensure Romania’s energy independence and reduce dependence on Russian gas, according to Energy Minister Virgil Popescu.

“Romanian gas for Romanians! The new offshore law was submitted to the Parliament today. It is very important that we managed to have the support of a majority for such an important law, which will be adopted in the emergency procedure. The offshore law was and is a priority for me and my PNL colleagues. First of all, through the amendments we make to Law 256, approved in 2018, we unblock investments and thus ensure Romania’s energy independence and reduce its dependence on Russian gas. We establish a competitive fiscal regime so that the distribution of revenues is made in a percentage of approximately 60% (Romanian state) – 40% (investor). Another extremely important aspect is the following: the law ensures the stability and legislative predictability for offshore investors in the Black Sea, as well as in deep onshore project,” the minister wrote on his Facebook page on Friday, according to Agerpres.

He stressed that the first Black Sea gas will be exploited in the second half of this year and that it is about a production of about one billion cubic meters per year – as Investors from Black Sea Oil and Gas are in an advanced stage with works and already have the reception report at the end of the works.

“Moreover, the law establishes the same fiscal framework for deep offshore and onshore investments, practically accelerating onshore investments in Caragele, Buzau County, the largest gas field discovered in the last 30 years in Romania. We estimate that the works will start here at the beginning of 2024. At the Neptun Deep perimeter, the works will start next year and the first natural gas will come at the earliest at the end of 2026 – the beginning of 2027. Yes, as I said, Romanians will have Romanian gas in their homes. And not only that! Romania will have a surplus of natural gas, practically doubling its production far beyond the current need for domestic consumption. And another very important aspect: our country will become a provider of regional energy security,” he said.

previousUSR demands that the revenues from the Offshore Law reach Pillar 2 of pensions
nextOffshore Law: The Romanian state is the main winner, with up to 78% of net gains – AEI