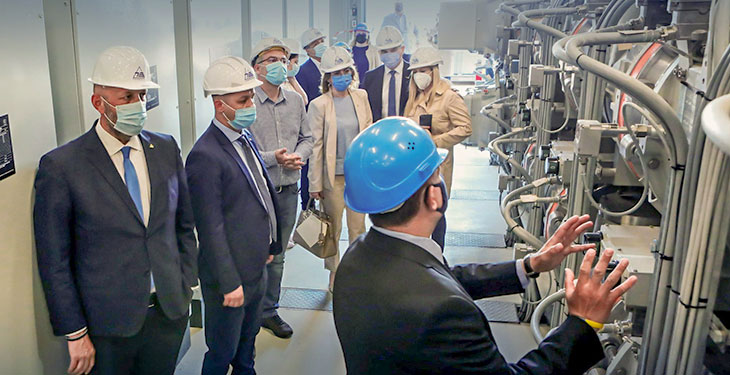 The refurbishment project of the 400/110/20kV Domnești substation, a total investment of about 25 million euro from Transelectrica SA’s own funds, is currently 95% completed, the completion of the works being expected by the end of June. The investment involves upgrading the station at all voltage levels, in order to bring it to a degree of safety and reliability appropriate to the importance of the area served.

The members of the Company’s Management Board and members of the Supervisory Board visited the construction site of the 400/110/20 kV Transformation Power Station, where the last works from a refurbishment process that lasted approximately 3 years are being performed.

“The refurbishment works of the Domnești Station were of a high degree of complexity, especially because at the same time it was necessary to ensure the continuity and supply of consumers and the safety of the National Power System. It is very important to mention that the technological level to which the station is brought is an advanced one, being implemented the GIS (Gas-Insulated Switchgear) technology for both the 400 kV substation and the 110 kV substation. Domnești station will be one of the most modern stations in the electric transmission network in Romania. In the last year, although it was a difficult period in the context of the pandemic, we managed to bring to the final stage this extremely important investment for the National Electric Power System. Bucharest needs security in the supply of electricity and only consistent investments in energy transmission infrastructure can guarantee this. The Company’s management maintains its commitment to investments, in order to guarantee the performance of a public service at high performance standards,” said Cătălin Nițu, President of Transelectrica’s Management Board.

The investment objective is part of the extensive process carried out by the Company to consolidate the electricity transmission infrastructure in the Bucharest area, in the context in which Ilfov County together with the Municipality of Bucharest is the most concentrated area of electricity consumption in the country, respectively about 15% of total national consumption.

previousE.ON, after the Competition fine: Delgaz Grid’s behavior didn’t have negative effects in the market
nextTermination of the contract for the Iernut plant, postponed again