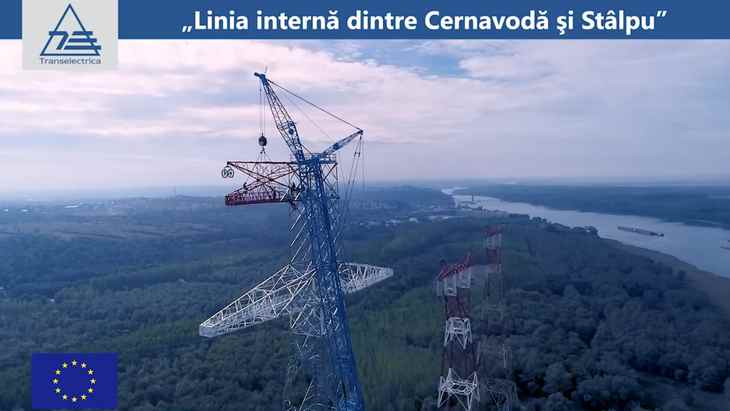 The construction of the 400 kV Cernavodă-Stâlpu Overhead Power Line, a project co-financed by the Connectig Europe Facility Mechanism, is advancing at an accelerated pace. Currently, the teams of the constructor, Electromontaj SA, and of Transelectrica are completing a unique stage in the history of large Romanian energy infrastructure, of extraordinary technical complexity, namely the erection of the two tallest poles in Romania’s Electric Transport Network. Located on the two banks of the Danube, they are 150 meters high and will support the conductors of the overhead power line that will cross the Danube.

The President of the Directorate, Gabriel Andronache, and Ștefănița Munteanu, a member of the Directorate, visited the construction site in Cernavodă where the raising of the second pillar is being completed, through a complex technical process used for the first time in Romania in an energy infrastructure work .

“I congratulate the teams of specialists who got involved and dedicated themselves to the development of this essential project for strengthening Romania’s energy security. Increasing the capacity to integrate renewable energy into the electrical transmission network is one of the main axes of our development plan, and the contribution of the Cernavodă-Stâlpu line to achieving this goal is significant. The fact that such a large-scale work has been carried out for the past 30 years is proof that it is possible!,” said Gabriel Andronache.

The steps to carry out this important phase of the work, namely the crossing of the Danube river, involved special preparations on the part of the builders and the teams of Transelectrica specialists. With a height of 150 meters and a weight of approximately 320 tons each, the pillars were lifted in sections, with a 600-ton crane specially brought from Germany, in a unique technical process in Romania. 1,402 cubic meters of concrete and 133 tons of reinforcement were used to build the foundations of a single pillar. The erection of a single such pole required a time frame of about 3 weeks, depending on the weather conditions.

The next stage of the project will start at the beginning of October and is represented by the laying of conductors for the Danube river, with the construction of the overhead power line to be completed in December. The last work of crossing the Danube with an overhead power line was carried out in 1987, it was about the 400 kV Cernavodă – Gura Ialomiței LV.

The 400 kV Cernavodă-Stâlpu Overhead Power Line infrastructure objective, a total investment of around 75 million euros, benefits from non-refundable co-financing of 27 million euros through the Connecting Europe Facility (CEF). The project is part of the North-South Interconnection East Electricity Corridor and aims to strengthen the cross-section between the west coast of the Black Sea and the rest of the European system , contributing at the same time to the strengthening of the electricity transmission network in Romania, to the increase of the interconnection capacity between Romania and Bulgaria and to the integration of the wind energy produced in the Dobrogea area.