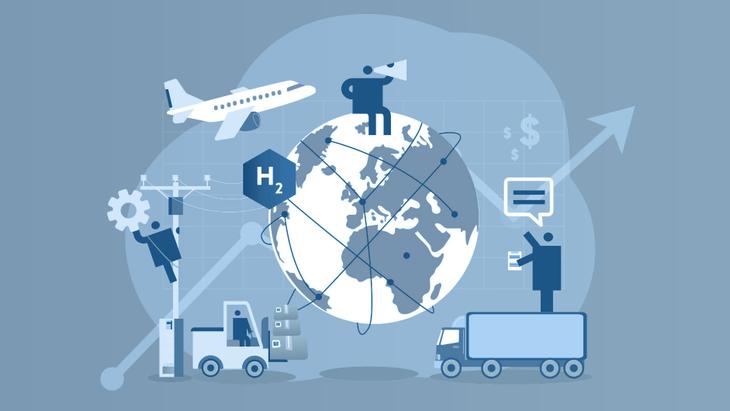 On November 25, CNR-CME in partnership with FEL Romania (CNR-CME Youth Program) organized the Conference “Hydrogen – A sustainable solution for the energy transition to achieving climate neutrality”. An element to note is the number and quality of the participating speakers, who guaranteed quality content. Thus, Cătălin Stancu, a senior expert associate at Horvath & Partners, reminded that on July 8, 2020, the Hydrogen Strategy in Europe was launched, followed, according to Alexandru Floristean, Intelligence Department Manager at Hydrogen Europe, by the “birth certificate” of hydrogen in Europe, on June 30, 202, with the enactment of the concept of climate neutrality.

“The EU strategy must be taken as a programmatic document,” said Răzvan Grecu, director of the Strategy and Market Studies Department at ENGIE Romania. “The plans are ambitious, but the costs and the means available must be considered. Hydrogen cannot be considered in isolation from other low-CO2 gas solutions.” The Transgaz representative, Strategy Director Elisabeta Ghidiu, stated that “the road to hydrogen must pass through methane gas. “Transgaz is working on hydrogen injection projects in the gas pipelines” and “all those interested in carrying out the hydrogen strategy must be at the same table”, she added.

In his speech, Dan Drăgan, Secretary of State in the Ministry of Energy, reaffirmed that “we plan to approve the regulatory framework on hydrogen, in 2023, correlated with the Strategy that will be created in this regard.” The PNIESC program is to be updated in 2022, “and hydrogen will have an important place. The development of hydrogen production and use for fuel cells is in the attention of the Ministry of Energy, and current projects will be prepared for the use of natural gas mixed with hydrogen. According to the Secretary of State, a new technology department and a working group have been set up at the ministry to promote the use of hydrogen.

Vector of decarbonization and dependent on CO2 capture

Gyorgy Szilagyi, director of the New Solutions and Projects Department at E.ON, announced that Delgaz is ready to transport 20% hydrogen mixtures, and E.ON is ready to be a partner throughout the hydrogen technology chain. “In fact, the E.ON Group has more than 50 projects in various stages of development, some of which are in the implementation stage,” said Gyorgy Szilagyi, adding: “Current projects become competitive if there is financial support.”

The price of CO2 certificates has already exceeded the threshold of 71 euros per unit and the threshold of 100 euros will be reached very soon, it was stated during the CNR-CME conference. This is considered by Petru Rușeț, CEO of Siemens Energy, “the main tool for decarbonization”. At the same time, Andreas Lier, CEO of BASF Romania, observed: “the color classification of hydrogen production does not provide a clear characterization of it. BASF produces large amounts of hydrogen, but uses high-CO2 technology, so solutions are being developed to significantly reduce CO2 emissions.” The chemical industry can produce “clean” hydrogen, Andreas Lier pointed out. For his part, Ioan Iordache, executive director of the Association for Hydrogen Energy (AEHR) and researcher at ICSI Râmnicu Vâlcea strengthened: “The colors allotted to hydrogen are not clear and the notion of low carbon hydrogen is preferred. But without people who are knowledgeable in hydrogen, we will not have viable plans. The specialized human resource is the most important for the implementation of the projects”.

Romania can position itself as a hub for hydrogen, believes Georgian Albu, general manager of FEL Romania, in whose opinion a priority is to establish gas transfer corridors for hydrogen transport. Cristina Bădică, director of the European Finance Department, RomCapital Invest, decried the fact that Romania did not yet have a strategy for implementing policies in the field of hydrogen, a document that other countries around us already have. “Hydrogen is produced and consumed [in Romania],” said Secretary of State Dan Dragan: “There is a strong interest from investors in hydrogen solutions, and primary and secondary hydrogen legislation needs to be updated”.