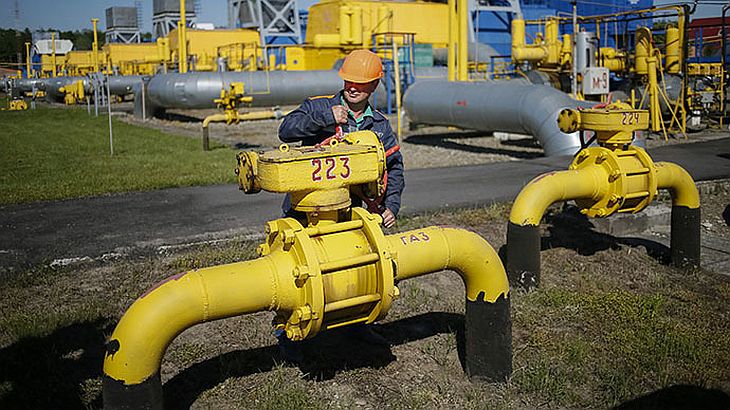 Russia will extend gas price discounts for Ukraine into the second quarter (Q2), the Kremlin website quoted President Vladimir Putin as saying Tuesday. But any further decisions would be taken in three months and depend on the price of oil. Russia’s gas monopoly Gazprom on Monday asked the government to extend a price discount for gas supplies to Ukraine for another three months, according to EurActiv.com.

Russia, which has sided with separatist rebels fighting against Kyiv troop in east Ukraine, halted gas flows to Ukraine last June due to a pricing row. The two sides though agreed on a “winter package” of Russian gas supplies until March 31, which included a price discount of 100 dollars per 1,000 cubic meters.

“The end-price for gas for our customers abroad is tied to the oil price anyway and it is very volatile on the global markets”, Putin was quoted as saying at a meeting with Russia’s Prime Minister Dmitry Medvedev. “We will have to look in three months at what is happening in that regard and take additional decisions”, he said.

The two agreed the decision was conditional on Kyiv paying its outstanding debt to Gazprom. Russia’s RIA news agency quoted Ukraine’s Energy and Coal Minister Volodymyr Demchyshyn as saying in Kyiv he expected the gas price to be 248 dollars per 1,000 cubic meters in the second quarter.

In what may be a negotiating tactic, Demchyshyn said last week his country planned to stop buying Russian gas from 1 April. A Commission expert however has said that without Russian supplies Ukraine cannot ensure the necessary 18-19 billion cubic meters of gas in its underground storage. The underground gas storage of Ukraine needs to be filled by April, and the filling may go into mid-October, the official explained, adding that the underground gas storage was needed not only for domestic consumption, but for ensuring the transit.