Acasă » Electricity » Petru Rușeț: The energy projects in Romania must get a faster pace in the next decade

Petru Rușeț: The energy projects in Romania must get a faster pace in the next decade 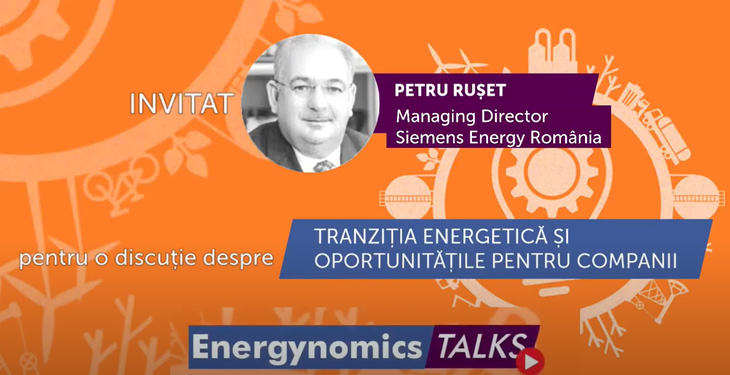 Romania has the chance to really enter a comprehensive and accelerated energy transition process, says Petru Rușeț, Managing Director Siemens Energy Romania. “I would like energy projects in Romania to get the speed needed in the next decade”, he said in an interview with Energynomics.

Siemens Energy Romania is a company that can cover the entire value chain in the energy industry. “Depending on the projects we are engaged in, we can be technology suppliers, technology and engineering suppliers or even general contractors,” said Petru Rușeț, outlining the scope of the dialog at EnergynomicsTalks.

Siemens Energy Romania currently employs about 200 people involved in projects in all energy sectors, and among the most important ones are electricity transmission and distribution, transmission and distribution of natural gas and oil, energy consumption in industry, as well as electricity generation from wind sources. “As we own the entire stake in Siemens Gamesa, we cover the renewable area as well”, specified Petru Rușeț.

Romania has at least 20 years with no significant investment in the power generation area and the payback time has come; we have to replace “the units put into operation in the years 60-70, with energy and financial efficiency far below current technology standards, and above all with much higher greenhouse gas emissions”. “Generating energy is a business, including for the state that produces energy and it is a strategic issue. In addition, Romania has excellent resources both in the renewable area and in the area of fossil fuels. It would be a pity for us not to use such resources,” Petru Rușeț believes.

Romania’s energy strategies, built on the basis of EU policies and support, are currently aimed at attracting investors in new capacities, based on the state-of-the-art technologies. An example is KMG’s 70 MW cogeneration plant, which will be ready in two years at most and which will be “hydrogen-ready from its first day of operation”. “If we want not to increase the price of electricity, we need to increase the generation efficiency from 30% on coal, for example, to 60% or even 90% in high-efficiency cogeneration,” said Petru Rușeț.

Opening the Romanian energy market, new financial instruments and European funds will contribute to the emergence and development of new generation projects in the next years, believes Petru Rușeț.

previousPwC Net Zero Economy Index: The rhythm of decarbonization must increase by 5 times
nextEuropean money for a new model of economic development