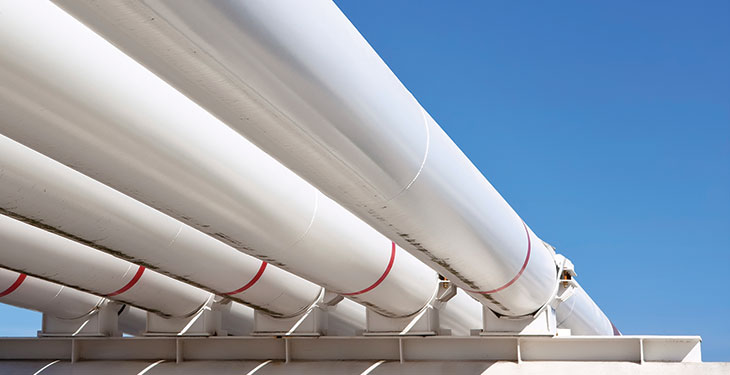 Romania has the largest reserves of natural gas in Central and Eastern Europe, however given the rather low annual average production (10.8 billion cubic metres) and taking into account the constant 5% annual decline of energy sources, combined with the replacement rate of 80%, it is estimated that Romania’s proved reserves of gas will run out in the next 9 years, and those of oil in 12 years if no investments will be made for new discoveries of hydrocarbons, as highlighted in mid-September by the Romanian Petroleum Exploration and Production Companies Association (ROPEPCA).

The government has consistently stated over the past 10 years the necessity to reduce dependence on imported gas. However, projects that have been assessed as critical to achieving these goals have not been implemented (i.e, the Nabucco project, the first project on shale gas).

Thus, Romania is still dependent on imports, although in the last two years the gas import has significantly decreased, for the last year the import of gas consumption being of 7.5%.

Following the 2009 gas crisis, the Bulgaria-Austria regional interconnection project, via Romania and Hungary (BRUA), has become a pillar for ensuring local and regional energy security and independence. The BRUA project is developed in the context of the necessity to diversify the gas supply sources of the European countries, ensure the transmission to the Central European markets of the Caspian Sea gas with direct consequences on the security increase of supply of natural gas to Romania by accessing new sources, availability on the Bulgarian direction of a bidirectional transmission capacity, and the development of a transmission capacity in the Hungarian direction.

In this context, starting with September 2016, Transgaz announces monthly auctions for booking capacity on the Negru Voda 1 – Isaccea 1 pipeline. For the months of November and December 2016, Transgaz has announced, via a press release published on its website, the registration on the Regional Booking Platform of the auctions regarding the unbundled capacities offered at the Negru Voda 1 interconnection point with Bulgaria. According to the press releases, the monthly unbundled firm capacity available on November and December for this interconnection point is of 92.007.608 kWh/day.

The need for legislative changes for the energy sector has led to a recent amendment in September 2016 of the Electricity and Natural Gas Law no. 123/2012 through the Government Emergency Ordinance No. 64/2016 (“Ordinance”). The main purpose of the Ordinance is to establish a competitive, transparent and non-discriminatory mechanism for transactions performed on the natural gas market in Romania. A major issue of concern consists in removing of the legal restrictions regarding the natural gas exports starting with 1 April 2017; Romania will thus align the Energy legislation with the European provisions of art. 35 and 36 of the TFEU.

In addition, the timetable for liberalization of the domestic natural gas price for household consumers and for the producers of thermal energy will be removed from 1st of April 2017.

Also, the Ordinance provides the obligation for natural gas producers and suppliers to conclude agreements on the Romanian competitive markets in a transparent and non-discriminatory manner. Therefore, the natural gas shall be traded either on OPCOM, a public company controlled by Transelectrica and the Ministry of Economy, either on the Romanian Commodities Exchange, a private company.

Clearly, any legislative change especially applicable to a not yet crystallized market will always be subject to pros and cons. But what it is noteworthy is the fact that the private sector is increasingly more interested and active in promoting a transparent stable and non-discriminatory legal framework. Under these circumstances, we can only hope that in the near future the Romanian legislative framework will be uniform, non-bureaucratic and in accordance with the latest international practices of the industry.

The need for legislative reform is still evident, and just as obvious is the need to align the primary and secondary legislation, as one of the issues mentioned as a hurdles by investors, is precisely the lack of uniform application and interpretation of a legislation governed by opacity and full of conceptual inconsistencies’.

The main issues dealt with by this law are those related to the rights conferred to the promoters of projects in the natural gas sector (private investors or state companies with exclusive competences in the natural gas sector) on access, use and exercise of the property rights over lands necessary for carrying out the construction works, development, modernization, operation, repairs, maintenance of pipes that are the subject of national interest projects.

The law provides for the rights of use, servitude, and access to the lands necessary for carrying out these works, as rights established under the law and exercisable without the consent of the owners of the respective lands, however subject to payment or to an obligation to put aside compensations equivalent to the respective limitations brought to the owners of the lands.

The law also establishes meaningful exceptions to special regulations governing certain types of lands protected by nature or designated scope (agricultural, forestry, natural habitats, etc.), with a view to ensure that the works related to the projects of national interest in the natural gas sector to be carried out without delay, unconditionally of the owners’ approval, and sometimes even free of charge in the case of public property or municipalities.

It is noted the legislator’s initiative to establish roles and define action plans for central and local public authorities and cooperation between them, in order to identify the lands affected by the exercise of those rights and to achieve other procedural matters expressly mentioned.

It is also obvious the intention to simplify the procedures for obtaining the required permits, approvals and authorizations, by establishing short deadlines for issuing the construction authorization, by listing the necessary legal acts useful for the authorizations, permits, approvals’ issuance, including by addition of the concession agreement or the operating license as supporting documentation. In this regard it is also noted the establishment of a special chapter on the conditions for challenging in court amounts set as compensations, under special hearings and proceedings which are to be settled with urgency and priority.

This law seems to express Romania’s interest to unlock certain legal and practical hurdles which were an impediment to the continuous and efficient development of the petroleum operations, respectively the impossibility to access and use the lands necessary for these operations as a notorious factor affected the industry, despite the current provisions of the Petroleum Law no. 238/2004 and Electricity and Natural Gas Law no. 123/2012.

The private sector is actively advocating in the last years for the amendment of the special laws regarding the oil and gas sector, however no significant progress could be reported at this stage.

Critics on this piece of legislation are not excluded, in terms of inconsistencies and lack of terminology alignment from the legislative technique standpoint. It would be interesting to follow up on the practical implementation of certain provisions, such as, for example, those that appear to confer, free of charge, legal rights to use the roads (including public ones), the exercise of rights of use / servitude of public property land.

Potential arguments may arise in respect to certain aspects of unconstitutionality of the normative act, especially considering the sensitive nature of the private property legal regime. Similarly, the inviolability of public property in terms of creation of dismemberments of the ownership rights (Rom, dezmembraminte; Engl. Easement rights in Common law), including the issues of exercising the rights on the construction works, without payment or recording of fair compensation, may be subject to future legal criticism.

Another interesting debate is related to the constant provision of the right of use and right of easement, as means to exercise the rights over the lands required for performing construction works, pipelines exploitation. Thus, the law provides for a right in rem recognised only to natural persons and respectively for a right of easement, when, in reality, the only real right applicable for the envisaged scenario is the right of superficies.

The unification of the legislative solutions for access to and use of lands required for petroleum operations is imperative for solving both practical problems and legal controversies. This still remains a desiderate, given that the recent Law no. 197/2016 approving Government Emergency Ordinance no. 22/2014 amending and supplementing Law no. 50/1991, appear to provide a derogating system for the execution of construction works required to carry out oil and natural gas prospecting and exploitation operations, for such operations are not declared as being of national importance, as those envisaged under Law no. 185/2016 . Accordingly, one may argue why different legislative scenarios have been contemplated for what appears to be identical situations (i.e. access and use of lands), however subject to a different and potentially discriminatory treatment applicable to the petroleum operations not declared of national interest and their titleholders who, unlike titleholders under national interest projects, are required to prove the creation of a deposit or the payment of the indemnities due to the owners of the land affected, prior to obtaining the building permit. Of course, the theoretical question arises again respectively the analysis of the possibilities of an implicit amendment of an organic law by an ordinary law, as it is the case of Law no. 197/2016 which has a different regulatory purpose than of the Petroleum Law no. 238/2004.

Such clarification is also required for avoiding any possible unconstitutional theses of the provisions related to the methods outlined by law for the establishment of real rights over the lands necessary for the building, exploitation and maintenance of these constructions.

Nonetheless, this legislative initiative is welcome, as it facilitates the implementation of significant measures converging towards local energy security, and regional interconnection and cooperation, however the need for a predictable, non-obsolete, competitive and investor friendly legislation applicable to the oil and gas industry remains more actual than ever.

The full version of this article can be read in printed edition of energynomics.ro Magazine, issued in December 2016.

In order to receive the next issue (March 2017) of energynomics.ro Magazine, we encourage you to write us at office [at] energynomics.ro to include you in our distribution list.