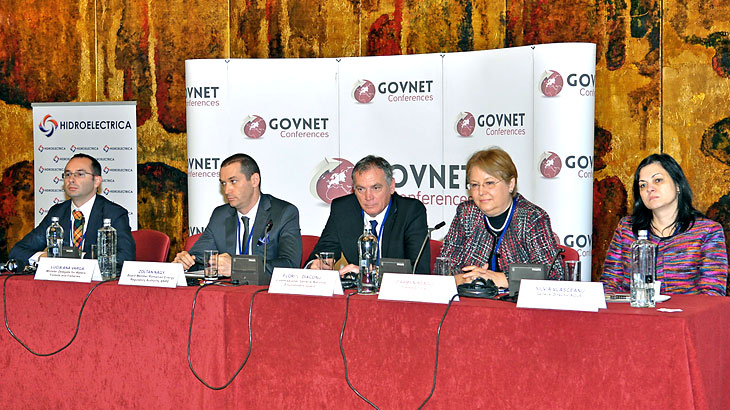 [one_half]A powerful discontent, an imminent concern and a bit of optimism have been the dominating feelings at the hydro power summit in 2014. Old issues but also new challenges have found their place on the agenda of the conference. The brave statements, the painful truths and the questions left unanswered have been in focus. There is potential, there are investors, still there is no stability. Hot debates can take place on the turbined water cost, the minor river bed rent, the tax on special constructions, Tarniţa, privatisation, environment, green certificates and other mandatory quotas. It is quite simple to conclude: only uncertainty is sure.

The energy sector has been passing for 24 years through a continuous transition and hydro power along with it. Whether we talk about the separation of activities in the energy sector and the set up of Hidroelectrica as successor of RENEL and CONEL in 2000, whether we refer to the spectacular rise in the cost of turbined water from 2010, we should not forget about the recent issues connected with regulation and financing or the challenges of privatisation and of the future listing.

The main issue of the hydro sector will continue to be the cost of the turbined water even if 2014 brought with it the tax on special constructions. If we refer to the micro-hydro plants, the minor river bed rent and the successive changes of the support systems, account for the „cherry on the cake”. Finally, the situation doesn’t stand better in terms of legislation.

The cost of turbined water rose more than 4 times in 2010, from 0.26 to 1.1 lei for each thousand of m3. Hidroelectrica is currently paying EUR 80 million for the water quantity that cost in 2010, lei 80 million. And it is not the only producer affected: at Rovinari, 13% of the production cost for a MWh is destined for the chilled water necessary for the steam power plant. The water is responsible for 48% of the production costs at Porţile de Fier and for 58% of the production costs at Târgu Jiu, subsidiaries that provide about 60% of the hydro production. The situation can be a lot more serious in terms of the micro-hydro plants, these costs related to the turbined water exceeding in some cases the costs of electrical energy, the salvation coming from the green certificates.  „The results of the legal framework that is totally wrong can be seen at the moment”, stated in this context Rodin Traicu, member in the Commission for Industries and Services. Mihai Teleanu, in his turn, member of Hidroelectrica directorate noticed that „Romania is the only in Europe in terms of this cost of turbined water […] that fact accounts for a hindrance in the capitalization of the micro hydro energy potential”.

The minor river bed rent – minimum EUR 4 per m2 per month – is another discouraging factor for investors. They accuse the lack of any means of buying or licence of the space destined for the micro hydro energy.

What is their total value and where are these considerable sums of money going?

The AN Apele Române representatives (the “Romanian Water” National Administration), people that are entitled to answer these questions, state that money remains in the system. „The contributions go to all the problems connected with the water management”, states Dragoș Cazan, director for the water resources management, at Apele Române. The industry and the commentators need beside statements, documents and concrete explanations!

The tax for special constructions, a new element of 2014, is another vagueness. What special construction refers to? What’s the justification for the introduction of this tax? Nothing is known for sure, still Hidroelectrica estimate is that other EUR 40 million will be allocated in this respect.

[/one_half][one_half_last]The support systems destined for micro hydro energy, are continually changing, starting from the Government Emergency Ordinance 57/2013 and ending with the Government Decision 994/2013. The procrastination or the reduction of the green certificates for the micro-hydro plants introduce new data in the equation and the most important, force the potential investors to orient towards other horizons.

Nor the legislation in this sector is an exception that confirms the rule: the excessive quantity of documents prepared and the classical bureaucracy complete the negative factors list in the hydro sector.

Other 100 micro-hydro plants are for sale

Romania still has a huge hydro and micro-hydro potential, we have investors, specialists, renowned design institutes and flexible financing methods. Moreover, it is stipulated that this year the negotiations for the hydro-power plant with accumulation through pumping Tarnița-Lăpuștești to be in direct line, which would mean that Romania might add to the European states that provide favourable conditions for such setup.

The privatisations of the micro-hydro plants that belong to Hidroelectrica continue, with all the capacities that do not stand for historic monuments to be put up for auction – the estimated number being 100. Two of the important players on the micro hydro energy market, CEZ and Hidroelectrica, recently completed programs to update and renew the existing units with positive results.

„The micro-hydro plants are not a threat for the environment, not at all”, stated Mihai Teleanu, from Hidroelectrica.  As a matter of fact, the president of the Micro Hydro Association, Bogdan Popa, states that there is wish for the development of micro-hydro plants projects, but “not at any cost”, the sustainability being the most important of all points of view!

The regulated tariff for renewable energy will operate in June-July

Finally, as a conclusion after the Romanian Hydro Power Energy Summit, organized by Govnet Conferences: the investors don’t know what they have to do. The decision factors face the same issue- the problem is that the latter group is paid for this. The small dose of optimism is not enough in order to exceed the legislative, financial or regulatory barriers. The results of over 100 years of experience are currently shaded by the lack of involvement as well as the shortcomings in administration and coordination.

previousThe tariff on water used to make power is an obstacle for hydro power development
nextOltenia Energy Complex could invest 2.5 billion lei for a 50% increase in coal production