Acasă » Renewables » Giles Dickson: REPowerEU is the strategy we need to accelerate investments in renewables

Giles Dickson: REPowerEU is the strategy we need to accelerate investments in renewables 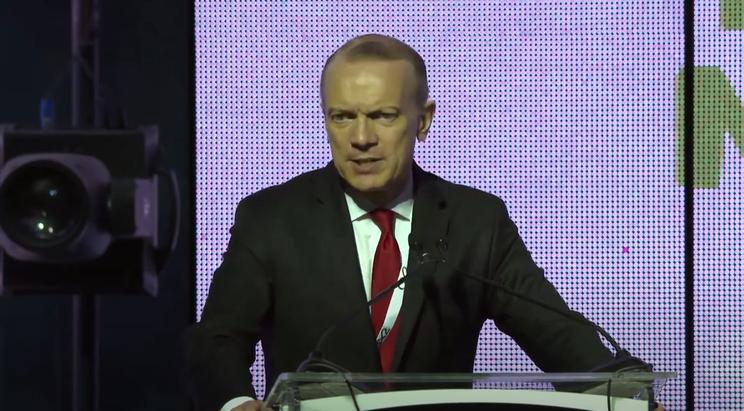 European Commission will present on Wednesday its new energy strategy REPowerEU, and this is how we can accelerate investments in renewables, by simplifying the permitting for new wind and solar projects, said Giles Dickson, CEO of WindEurope, at the RESinvest 2022 conference. ”Let’s hope that Brussels gets the message from this event this evening, loud and clear: That the Southeast Europe wants to play its part,” he said,

”Europe has a new approach on energy: no more Russian energy imports by 2027. To help substitute for that, more renewables are needed, more quickly. That makes perfect sense. Fossil fuel imports are expensive, while wind and solar are cheap. Wind and solar are local, create jobs, are clean. The accelerated transition to a reneables energy system clicks all the boxes: climate change, jobs growth, energy security for Europe,” said Giles Dickson.”Southeast Europe is especially blessed with wonderful wind and solar recources. This region of Europe already produces a lot of renewable energy. Wind is 11% of all electricity you consume in Romania. It’s 11% in Croatia. In Greece it is 18%. And still countries in this region don’t yet have that many wind farms or much solar capacity. The potential for expansion is huge. It is good to see that countries in this region are grabbing this potential, accelerating the process. The Government of Romania has this new capital-grants competition that has just opened for new wind and solar projects – with a deadline on 31st of May. Early next year, even better, Romania will do its first Contracts for Difference (CfD) auction for new wind and solar. Bulgaria is considering CfDs as well. Greece has big ambitions on both onshore and offshore wind, as we will hear shortly from the Greek Government,” he added.

Dickson stressed the importance of the supply chains.

“Here in Romania, Schaeffler makes bearings for the wind turbines. In Craiova, Electroputere is already making transformers for wind turbines. You can have much more from this action, from this investments,” he also said.

Dickson added that on Wednesday the European Comission will announce its new REPowerEU action plan.

“The REPowerEU action plan is the EU’s new energy strategy. Is how we get out of Russian energy imports and we get in for renewables big time. This is where it gets serious. REPowerEU is how we can accelerate investments in renewables, on how we can simplify the permitting for new wind and new solar. Let’s hope that Brussels gets the message from this event this evening, loud and clear: That the Southeast Europe wants to play its part in this,” the CEO of WindEurope concluded.

previousPignoloni: Renewable energy could lower prices nationally and regionally
nextTransgaz made a profit of almost 268 mln. lei, up 70%, in Q1