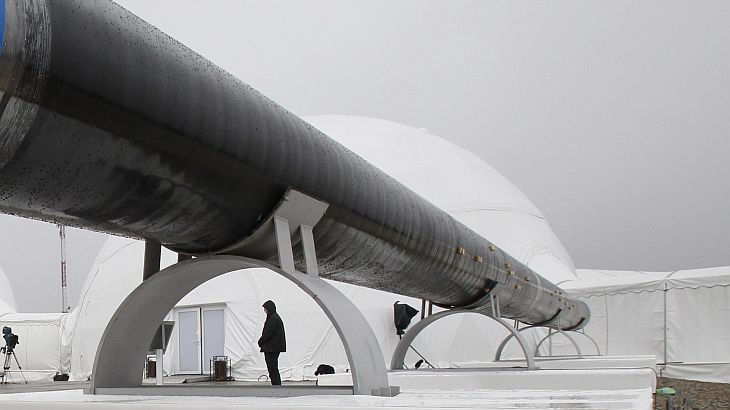 Gazprom and SOCAR will be, at least for some decades form now, the two companies to dominate Greece’s natural gas market. Natural Gas Europe writes that Gazprom sent recently a delegation to Athens to finalize a conclusive deal that aims to decrease import prices at the request of Greece. During this visit it is expected that the two parties will sign a new long-term agreement, although this one has 2016 as expiration date. The negotiations will be tough, since Greece requested a decrease of at least 20%, and all Russia can do is to offer only a 10% reduction.
The cheapest gas Russia delivers to the Western Europe is the one delivered to the UK, and the price Greece pays is with 50% more expensive. The new deal can be inked by the end of this year, and it is possible that the new document will state a 20 year contract, until 2036. In the highly unlikely scenario, the two sides will settle through an international arbitrary court.
The way prices for gas are created in Greece is a hybrid less used in Europe, and the greeks want that to change, under the allegation that this formula is ancient and divorced from the realities of the internal gas market. The supply agreements in this market are partially oil-indexed. More precisely, 70% is calculated in the form of liquid gas price and 30% mazut price indexed in Northwestern European markets.

On the other hand, SOCAR will pay 400 million euros for 66% of DESFA, the Greek gas network manager. Natural Gas Europe clever notes that the European Commission, through DG Competition, and the European energy regulator will have to certify the status of DESFA as an independent national system for gas transmission, since SOCAR is both a producer and a commercial gas company, and these two activities are unbundled under the European law.
SOCAR informed Brussels that it will not use DESFA as a supply entity for its own gas to the Greek market, since that role traditionally goes to DEPA, a state-owned company so far. Such a choice shows that all SOCAR wanted was to use DESFA as an instrument to make Trans-Adriatic Pipeline an attractive project. Greece will become in this context the base from which SOCAR will implement technological components (such as interconnectors, storages, LNG facilities) to help expand its international outreach.

SOCAR has also operations in Romania, although on a smaller scale, but with opportunities to grow. And the contemporary regional context might be the kick-start SOCAR needs to be more present. Until now SOCAR created a joint stock company with mixt romanian-azeri capital, buying a local company named Romtranspetrol. The local activity started in 2011 and initially had only 9 points for delivery of petroleum products to the average consumer. is today one of the most important players in the fuel distributing market in north-eastern Romania.
The main business, which has constantly accounted for over 90% of the turnover, is the retail sale of petroleum products through petrol stations.

The remaining 10% represent auto transport services with 20 own tankers and rental income from property. SOCAR also is, allegedly, on the Government shortlist to acquire Oltchim plant, at the same time with Arpechim Pitești refinery. The move can be seen an attempt to integrate these operations with SOCAR industrial applications in Turkey. Azerbaijan’s Energy Minister is said to arrive this autumn to visit Romania and discuss these issues more concrete.
Gazprom is the main company to sell imported gas in Romania. Although its dependency is quite low (only 20% gas imports), and Gazprom doesn’t sell the gas directly, Romania takes almost all of that imported gas from intermediaries approved by Gazprom through two pipelines positioned in northern and eastern Romania. Moreover, Gazprom, through its Serbian subsidiary NIS, has big plans for its  fuel stations în Romania. By the end of 2015 Gazprom-NIS wants to open 120 fuel filling stations, with a total investment cost of 150 million euros.
Romania is the second European country, after Serbia, in which Gazprom develops fuel filling stations. Moreover, just recently Bursa newspaper stated that Gazprom intends to acquire the almost bankrupt Oltchim petrochemical plant, through one of the smaller Russian energy companies, Oil Gas Trade LLC.

They are here to stay and grow

Apparently, the two companies have found a niche to grow into: the development of network stations in the regions where the big local players, like OMV Petrom or Rompetrol, are not that present. These regions are mainly in north-eastern and south-western Romania. In the near future we can expect that all their projects will be expanded only there, through buying some independent stations or putting in place a logistic rationale. For example, Gazprom-NIS will surely make more use of its refineries in Pancevo and Novi Sad to supply its Romanian operations. SOCAR also takes into account the development of a local supply network of its own.