Globally, and in the EU in particular, there is a very strong push in limitation the use of natural gas for the next decades; at the same time, having more gas-fired CHP plants seems to be the only way to move forward initiatives like the Renovation Wave, for example. What is the reality beyond competing narratives? Here are some answers from the expert guests Energynomics invited in a LIVE ONLINE conference in its Regional Approach series Brussels – Energy Transition.

“Natural gas is quite a contentious topic”, admitted Hans Korteweg, Managing Director of COGEN Europe. There are the “supporters of electrons against molecules”, he said, and a very strong push towards electrification. “There have been studies made by the electricity sector showing that we could electrify up to 65% of our societies, but there’s still a large share that cannot be electrified, in particular heat and industrial heat”, he noted.

For the next 10 15 years, I don’t see a strong shift away from natural gas – Hans Korteweg, Managing Director of COGEN Europe.

“There’s a lot of discussion about the role of hydrogen, the role of other decarbonized gases, power to x, biogas – all these have a role to play, but it’s not going to happen overnight. Gas will continue to be an important commodity to be used, natural gas has a role to play in the transition and especially in Central Eastern Europe where coal still being used, in countries like Romania or Poland”, Korteweg said.

From Romania, the country’s largest gas producer pleads for technological neutrality and predictability in terms of regulations and EU programs. European policies have already been delayed, and this is hampering companies’ decisions. “For Romania, it is very important to see how the policies will be formulated”, said Mihaela Toader – Director of Strategy, International Relations, European Funds Department at Romgaz.

“We are ready to invest. We are a solid company, we want to strengthen our core business, gas production, and make very good use of this unique product – the only solution available at this time to increase electricity generation capacity in Romania. We aim to generate electricity with the help of the best technologies”, said Mihaela Toader.

Romgaz will use the Modernization Fund for various projects, including the Mintia natural gas plant, a project that has been worked on for the last two years and which has already a feasibility study approved. The project for renewables will be included among these projects only next year, as only mature projects with an already existing co-financing component can be included in the list of the Modernization Fund.

Now is the time of preparation and observations, because the time available until the beginning of the new financial year is very short. “Practically, the same story from 2014 is happening again: neither the budget nor the new regulations were adopted before the new financial excercise. There was a lot of uncertainty, no one knew how to build a future project in order to have eligible projects, and this led to a series of delays, low absorption rate and a lack of confidence. We see this situation once again. Unfortunately, for the Modernization Fund, which should be our main fund for transition, (the files) are not ready, the main act was tacitly adopted in July, and the Member States are trying to regain ground and adopt it in their own legislation, in order to be able to implement it. This is very worrying for us”, she said.

“Romania still has many opportunities for the gas market, and with the coal phase-out, gas is still the transition solution until 2030,” said Florin Frunză, CEO of MET Romania Energy.

“We are certified as a supplier of green electricity that can provide customers with 100% green energy and we believe that renewable energy will increase in importance in the coming years, because customers ask for it. At the same time, I believe, however, that gas will still play an important role this decade and in the next decade. I believe in the versatility of natural gas, which has an important role in the production of electricity and heat. The chemical industry cannot do without gas, and in transport, also, the role of natural gas will remain important because it is an low emissions alternative fuel”, he added.

Kawasaki bets on cogeneration and hydrogen, said Shahrad Adjili, Head of Sales, Kawasaki Gas Turbines Europe. “Today a many industries use cogeneration, and we have industrial applications in many sectors, as one of the leaders in the low-emission gas turbine industry. We are interested in installing, in the near future, standard 100 MW solutions in combined cycle applications (CCPP), as we have already done in Japan. Kawasaki also provides hybrid solutions for the chemical industry. We are the only ones in the world that produce not only gas turbines, but also engines, so we can offer high-efficiency hybrid solutions for the industry”, he added.

At the same time, Kawasaki built the first hydrogen-based cogeneration plant in Kobe, Japan. Here, the plant uses 100% hydrogen, producing 1.7 MWe, but natural gas can also be used in the combustion process. Kawasaki was the first company in the world to produce a transport vessel for liquid hydrogen.

The Brussels – Energy Transition conference on October 28 was part of the Regional Approach series initiated by Energynomics in 2019. Another two conferences are scheduled this year, Chișinău (November 19) and Sofia (November 24).  The event was recommended by recommended by Belgian Luxembourg Romanian Moldovan Chamber of Commerce in Romania (DOWNLOAD THE PRESENTATION OF ALAIN SCHODTS) and The Romanian-Belgian Business Club – CAROMB, COGEN Europe. 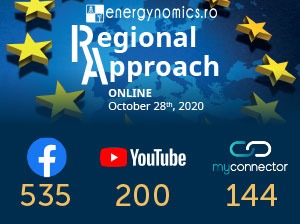