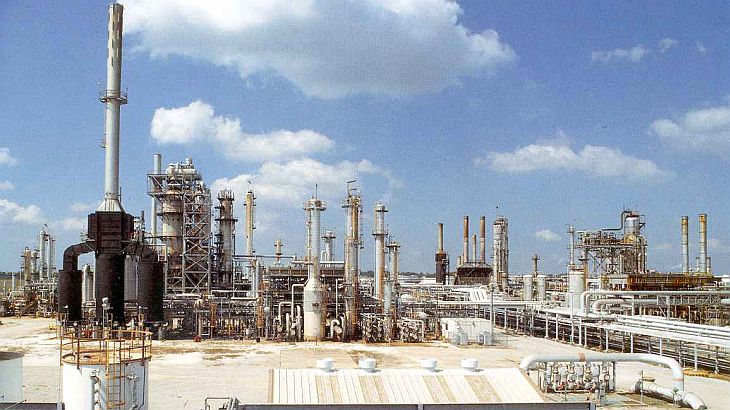 There is widespread agreement on the problem facing Europe’s troubled oil refining sector but no consensus about how to solve it.

Europe’s refineries were mostly built between the 1950s and 1970s and geared to producing as much gasoline as possible, according to Reuters.

The centrepiece of most refineries is a fluid catalytic cracking unit (FCCU), which cracks heavy gas oil from the atmospheric distillation column into a range of lighter products, including gasoline and diesel, using temperature and moderate pressure in the presence of a zeolite catalyst.

But regional demand for gasoline peaked in the 1990s and is now falling rapidly, while demand for middle distillates like diesel and jet fuel is still increasing.

In Britain, the crossover point came in 2006, when consumption of diesel surpassed gasoline for the first time. Britain’s gasoline consumption is falling 6-7 percent every year, while demand for diesel and jet is growing 1 percent.

The result is that oil refineries have the wrong configuration and produce the wrong fuel mix.

“Our refineries are petrol-facing, if you like, and not diesel-facing, and although they compete well at the moment in Europe, the long-term trend puts them at a disadvantage,” Energy Minister Michael Fallon told a parliamentary inquiry into Britain’s refining industry in June.

“They are producing too much petrol, not enough high-value diesel or jet and they are less likely to compete with the refineries of the future and therefore the investment case for investing in them will probably get weaker,” Fallon said to the House of Commons Energy and Climate Change Committee.

The most straightforward way to shift the fuel mix would involve adding a hydrocracking unit. Unlike an FCCU, which cracks heavy gas oil from the atmospheric distillation column, a hydrocracker cracks much heavier residuals like vacuum gas oil under tremendous pressure in the presence of hydrogen and produces mostly diesel and jet.

Hydrocrackers require a source of extra hydrogen, which is expensive. In most cases, a steam methane reforming unit must be built to produce hydrogen from natural gas.

The hydrocracker will also require a sulphur recovery unit. Hydrogen reacts with any sulphur in the feedstock to produce deadly hydrogen sulphide gas which must be burned or converted to elemental sulphur to be sold.

To change the gasoline/diesel output mix “you need hydrocracking technology and this is probably around 1 billion pounds per refinery”, the UK Petroleum Industry Association, which represents refiners, told the Energy and Climate Change Committee. “Economically that is not really justified.”

“For a refinery like Stanlow, which is the UK’s second-largest refinery, it would be over 1 billion pounds and the returns would be below the cost of capital,” a representative of Essar, the refinery owner, told the inquiry.

“It would have a considerable impact on our diesel and jet make and it would reduce gasoline probably below 20 percent of total output and raise diesel to about 40 percent,” Essar explained. “But with the current margins we would not be able to remunerate that amount of spend.”

“Refineries will keep on investing some money into de-bottlenecking … so that you incrementally increase the diesel and jet production and reduce the gasoline,” Essar said.

“We are re-lifing our refinery … for the next 25 years and spending a lot of money. But to incrementally reduce gasoline and increase diesel and jet, the marginal environment would need to be very different before we could take the risk of spending 1 billion pounds.”

Unfortunately, the mix of gasoline and diesel demand is changing faster than the refineries are adapting, Reuters analyst concludes.