Acasă » Electricity » Energy Day – Brașov: The time has come for the next wave of investments in renewables

Energy Day – Brașov: The time has come for the next wave of investments in renewables 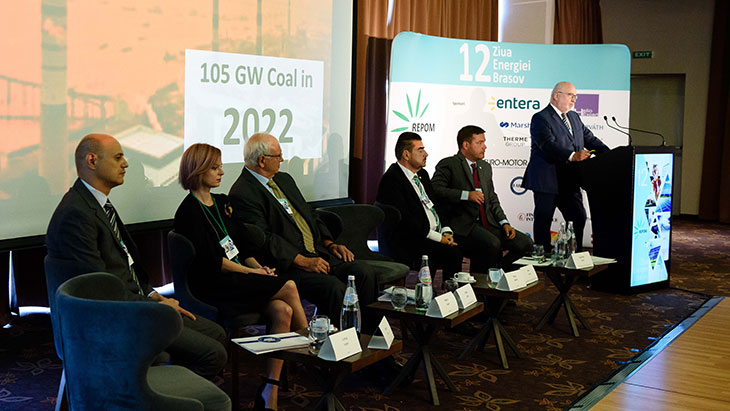 More than 150 participants and leaders of the energy community from Romania and Europe were present at the 12th edition of the Brașov Energy Day conference, to discuss investments in the renewable sector and measures they consider necessary to achieve the objectives of climate neutrality of the European Green Deal.

A reference event for the renewables sector, organized by Repom, which took place on September 10, 2021, at Hotel Belvedere Brașov. The European Green Deal, the Fit for 55 Package, prosumers in Romania, how to adopt and finance these goals in the EU and Romania, what are the plans abroad, what technologies exist and are feasible and what is being developed were the main topics for debate at the conference.

Dan Dragan, Secretary of State in the Ministry of Energy, opened this year’s conference, announcing that Romania will increase the target for renewables for 2030, after a reassessment of PNIESC next year. Dragan also announced that the Modernization Fund will make available 10 billion euros for investments in new renewable production capacities, in conjunction with the strengthening of distribution networks, investments in cogeneration production units and storage units, as well as in the production of of hydrogen etc. The Government decision, through which the Modernization Fund is implemented, will be approved in October, the official of the Ministry of Energy advancing as a deadline the end of this year or the beginning of next year for the launch of the first projects.

Zoltan Nagy-Bege, Vice President of ANRE, expressed his hope that “in 10 years Romania will be as green as Brasov aims to be.” Deputy Mayor Flavia Boghiu announced, on Energy Day, that Brasov will be the green capital of Romania, a city with cleaner air, freer cars, more green space and energy efficient buildings.

Referring to the current situation in the energy sector, the ANRE representative admitted that “foreign investors are still discouraged from doing business in Romania. For 9 years we have been stuck in regulating some aspects related to the primary legislation regarding the situation of bilateral contracts. This brought chaos. We drive away any healthy businessman,”said Zoltan Nagy-Bege.

Another confusion is made when authorizing the establishment of a plant larger than 1 MW. ”An investor who wants to build such a power plant must currently obtain authorization from both ANRE and the Ministry of Energy. By law, the Ministry of Energy must issue these authorizations, but it has notified us that it does not have specialized personnel and we will take care of them. That’s what we do,” said the vice-president of ANRE. At the end of his speech, Nagy-Bege sent a clear message to investors: “If we – ANRE – give you in writing that you have the right to make bilateral contracts without violating the primary law, you have this right.”

Regarding the liberalization of the electricity market, the ANRE official stated: “Unfortunately, there are chances that this liberalization will not pass the childhood phase. I hope that politicians will resist the temptation to cap energy prices. Otherwise, there is a risk of throwing Romania backwards.”

“About the European Green Deal. Basically, Europe has set itself some very ambitious targets in the area of energy and the environment, respectively, we have a target to reduce carbon dioxide emissions by 55% by 2030 and beyond. to achieve, as a continent, climate neutrality by 2050,” said Martin Moise, Repom’s CEO, the conference’s organizer. In the opening session of the Brașov Energy Day, Mr. Jürgen Ludwig, REPOM consultant, presented the long-term objectives – 2030/2050. In turn, Mr. Iulian Iancu, President of CNR-CME, invited to debates in realistic terms of application of The European Green Deal, a realistic approach to a mega-theme for which Europe has taken the lead: “We are all obliged to see to what extent we are capable, at the given time, of the given resources and, when I refer to resources , I do not mean money, I mean raw materials, equipment and human resources,” said Iancu.

The President of the Brașov Chamber of Commerce and Industry, Silviu Costea, sent a realistic message from the point of view of business people, at the Brașov Energy Day: sanitation, rising commodity prices, delays in supply, rising exchange rates, rising utilities, and all this amid a labor crisis, feel compelled to change their investment strategies. We are all starting to think more about the very short term than the very long term, and for many investors the year 2015 is too far away to think today about switching to renewable energy and investing in this field, even through superior technologies… Large enterprises will have very high costs in the next period. The signal that I can send is more of an investor request to the authorities involved in allocating non-reimbursable funds, which will direct more money to this area and thus help businesses more to get through this difficult period. My message did not want to be pessimistic, but it wanted to be realistic from the point of view of business people.”

In turn, Martin Moise came up with an optimistic message: “We are really very concerned about the price of energy in both the electricity and natural gas areas and it is a challenge for companies and the population. But there is also a full part of the glass: always, when this price for utilities increases, the appetite for new investments increases, they become more feasible and we know well that today in the area of electricity, at least, the cheapest sources are the renewables. We see a great effervescence in the industrial sector and I am convinced that the companies from Brașov, and not only, will start in increasing numbers to put panels on the roofs and to invest a lot in energy efficiency because, in the end – the cheapest megawatt is the one we don’t consume.”

Also, Viorel Lefter, President of PATRES, stressed: “Romania has been endowed by God with a special potential from the point of view of renewable energy sources. Although the human potential is huge regarding the development of new energy capacities from renewable sources and energy policies support a sharp increase in the share of renewable energy, Romania has proposed an increase of only 4 percent between 2021 and 2030. In these conditions, with this renewable target, not that we are pessimistic, we are trying to be realistic: Romania will continue to import energy with negative consequences on the price of energy.”

In addition, Martin Moise, First Vice President of PATRES, stated: “We believe that the time has come for the next wave of investment in renewables. We need a restart. So, the urge is to get our hands on the board, on the folders, on the projects, on the dig, on the field and to install new capacities because they are absolutely necessary and without them you can’t go on.”

“How do we implement the European Green Deal? Concrete transposition” – was the theme of the second panel. Speakers – Adrian Tănase, Executive Director of the Bucharest Stock Exchange; Amalia Stamate, Senior Economist of BNR; Romulus Mircea, Raiffeisen Balance Sheet and Portfolio Management Director; Viorel Beltechi, Executive Director of Therme Group; Jürgen Ludwig, REPOM Consultant and Claudiu Butacu, Co-Founder, EFdeN – talked about green financing through the capital market, presenting ways to support green financing, green bonds to finance the transition to a sustainable economy, smart metering projects, innovation for green energy. The community of investors is increasingly asking to finance projects dedicated to green investments and to create opportunities, said the representative of the Bucharest Stock Exchange. The conference enjoyed the views expressed by experts from the international community. Barbara Saerbeck, member of AGORA Energiewende, a group of independent experts dedicated to climate and energy goals set by the European and German political environment, presented some of the 50 measures proposed to Germany to achieve the 2030/2045 targets. And Julian Popov, a member of the Climate-KIC Advisory Council, spoke about the transition to green hydrogen and the European prospects for achieving the goals set by the European Green Deal.

Euro Motor came with electric cars to the conference, which were made available to participants for test drives.

REPOM, a company operating in the field of operation and management of renewable energy installations, continued the tradition and organized the Brașov Energy Day, which is in its 13th edition, one of the most important specialized events in Romania. The conference benefited from the support of ENTERA, the first producer and supplier of 100% green aggregate, wind and solar energy in Romania.