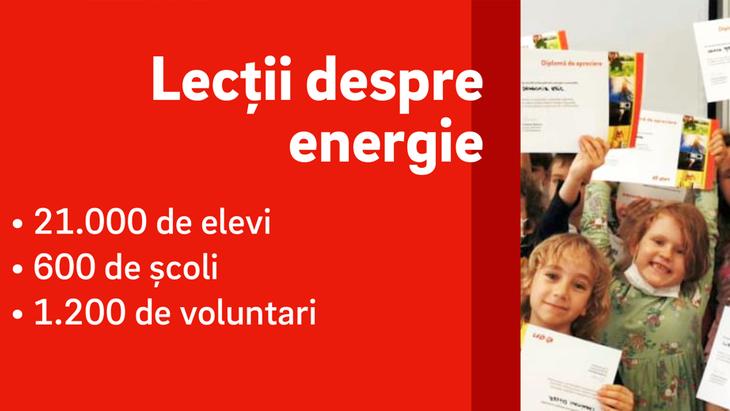 Almost 1,400 students and 85 teachers from 20 schools in Iași, Mureș, Neamț, Sălaj, Cluj, Arad, Suceava and Alba counties attended, in the first half of this year, the energy lessons given by Delgaz Grid volunteers, E.ON and the representatives of the County Inspectorates for Emergency Situations.

“I was really happy that after a very hard time with the pandemic, I was able to get back into a class of kids, where I was able to tell them and share a few things about my 18-year experience in our company. I felt emotional at the beginning of the lesson, but then I didn’t even realize how an hour and a half had passed. The children really liked the discussions, materials and experiments presented,” said Călin Oprea, one of the Delgaz Grid volunteers.

The students were very curious and had a lot of questions for our volunteers, among whom was, recently, the CEO of E.ON Romania, Volker Raffel, who explained to the children, in their understanding, how energy is produced, what happens if a city or an entire country runs out of electricity, how the teams intervene when a storm breaks the power lines or where the most gas is consumed and why.

“As a father of three children of similar ages, I knew that the little ones have a boundless curiosity and my expectations were not deceived. They asked me a lot of questions and I tried to explain to them how electricity is produced or how we can reduce energy consumption while maintaining comfort and avoiding waste. It was a very pleasant experience, although there were some questions that put me in trouble and I strongly believe that we must do everything we can give the little ones the information they need,” said Volker Raffel after spending one hour as a teacher at the “Romulus Guga” School in Târgu Mureș.

Delgaz Grid and E.ON volunteers are impressed at every lesson with the atmosphere in the classrooms and the children’s curiosity and enthusiasm.

The most recent meeting of the project “Lessons about Energy” took place last week, at the Art High School Târgu-Mureș, where partners from the Inspectorate for Emergency Situations “Horea” Mureș also carried out an evacuation exercise, in which children they learned how to behave around energy sources and what to do to prevent life-threatening incidents.

The “Energy Lessons” project of E.ON Romania started in 2009, its purpose being teaching children the rules of safe use of different forms of energy. During the 13 years, approximately 1,200 volunteers who shared information about energy and safety with the 21,000 students from 600 schools in the E.ON and Delgaz Grid area were involved in this program.