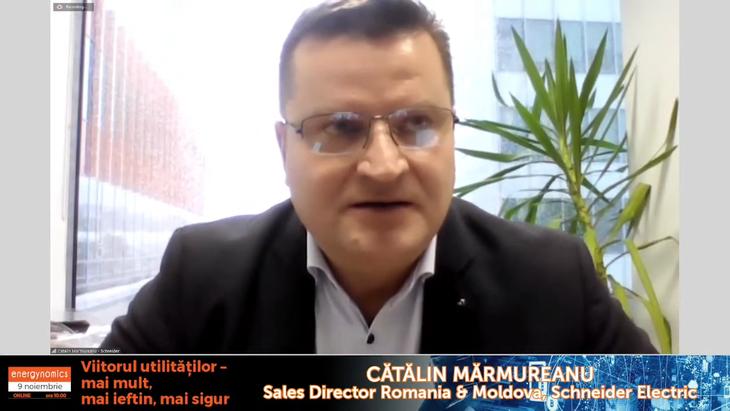 Digital networks is about generating and managing large volumes of data for both producers and consumers, which is one of the challenges facing energy utility companies even today. “We will not be able to cope with the trends of the coming decades, if we continue to use the same processes,” said Cătălin Mărmureanu, sales director for Romania and the Republic of Moldova, at Schneider Electric, during the conference “Future of utilities”, organized by Energynomics. “The solution is to change the mix of energy we use, mainly in favor of renewable sources; large utility networks can play a very important role in capitalizing on the opportunities brought by the decarbonization transition,” he said.

Efforts to reduce the impact on the environment will contribute to the increase in demand for electricity from renewable sources. The transition to electricity transport will also stimulate demand, along with the growing need for electricity for HVAC and data servers. “All this means a 62% higher demand for electricity by 2050”, said Cătălin Mărmureanu, who then referred to three areas of intervention for a sustainable future: decarbonised generation and integration of renewables, increased efficiency through digitalization and decarbonisation of networks through the use of more green equipment.

Losses in the European transmission and distribution area amount to $ 5 billion annually, given that 67% of electricity production is based on fossil fuels. As a result, reducing utility network losses can significantly contribute not only to better financial performance, but also to the common decarbonisation effort. “In addition, many of the equipment used in electricity transmission networks use SF6, a gas with extraordinary electrical performance, but with a strong impact on the environment, if not properly recycled,” said Cătălin Mărmureanu.

According to him, digitalization is the solution both for the integration of renewable energy sources and to meeting the consumers’ needs. “We can play a positive role if we integrate electricity with digital.”

An example presented by Cătălin Mărmureanu was a utility company from Italy, which implemented Schneider Electric solutions in its network of secondary substations – control points and ADMS to control the entire network. “Through this investment, the company has reached the performance of integrating renewable energy very quickly and with maximum efficiency. Everything came together with the reduction of network losses, the improvement of SAID-SAIFI indicators, with fewer and more efficient field interventions”, explained the representative of Schneider Electric.

previousArmand Domuță confirms: The 18,000 Restart customers in the gas segment will switch to FUI mode on Friday
nextCoal production increased by 20.8% in the first nine months of 2021