Banks are increasingly moving towards the idea of sustainable financing 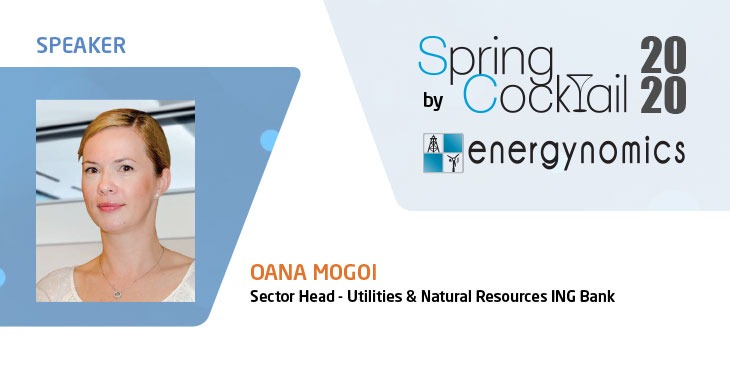 Large energy companies, including from the oil and gas industry, are reorienting themselves to energy production from unconventional sources. Even large oil-producing countries, such as Russia and the Gulf countries, join the fight to reduce emissions and combat climate changes by signing the Paris Convention. Companies with a tradition in oil and gas exploitation, such as Shell, Total, Equinor, Repsol etc. invest more and more in renewable energy projects, says Oana Mogoi, Sector Head Utilities & Natural Resources, ING Bank.

“Romania must have a much better degree of adaptability to the energy transition compared to the Gulf countries, with economies much more dependent on hydrocarbons. Therefore, we must continue the investments started in 2010-2011, but obviously, we must do it in a much smarter way, without destabilizing the energy system or endangering existing projects. Just a legislative package or a green energy quota are certainly not enough. We have seen, in the past, that when things are not done in an integrated way, problems may occur. We need to think about developing the grid so that the costs associated with connecting renewable energy projects will no longer fall on the investors in these production capacities to let the cost reach grid parity. In addition, gas backup capabilities are needed to ensure the flexibility of the energy system, gas that needs to be taken out of the ground as soon as possible as it is the transition fuel.”, said Mogoi at the Spring Cocktail 2020 online video conference organized by Energynomics.

“For ING, things have been focused for a long time around the idea of sustainable finance to sustain society and the environment. It started in 1996, when the first sustainability study was done. In 2010 the first objectives were setup, and in 2015 the first green bonds were issued. Therefore, sustainable finance can be accessed through green loans and green bonds. A set of sustainability objectives is defined, the use of proceeds is monitored, as well as the achievement of these objectives.

The market for green bonds has grown a lot since 2012 – from about 4 billion euro, to over 200 billion euro last year, with investors becoming more and more interested in green portfolios, accepting even lower yields as they consider them more sustainable on long term. “The loan market is much smaller, but it offers some flexibility in terms of the minimum value of the projects. Basically, when we talk about bonds issuance size is over 150-200 – ideally 300 million euro, while for green loans, financing can get down to 5-10 million euro, Oana Mogoi also said.

previousValentin Tătaru, ING: We anticipate a 6.6% contraction in GDP for the current year
nextIohannis talks about gradual easing of the measures of economic restriction and movement of people from May 15