Acasă » Renewables » Adrian Paraschiv, Photomate: Solar projects must be thought in the medium and long term; the price of energy remains an unknown

Adrian Paraschiv, Photomate: Solar projects must be thought in the medium and long term; the price of energy remains an unknown 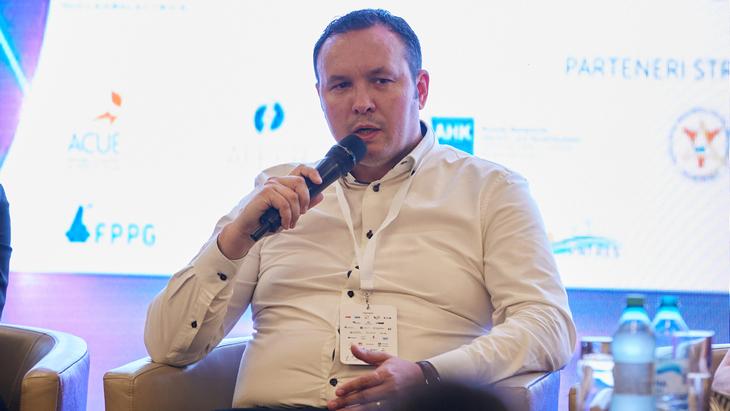 Technology has come to greatly reduce dependence on conventionally supplied energy, and solar projects need to be thought about in the medium and long term, although the price of energy remains an unknown, said Adrian Paraschiv, Photomate Country Manager, at the Energy Strategy Summit 2022, an event organised by Energynomics.

“At the moment, Romania is on an upward trend in terms of interest in renewable energy, and we see this in the many projects, especially in the photovoltaic field, which are being discussed these days. Here, projects discussed do not mean projects implemented, unfortunately, because when it comes to the implementation of projects we run into a problem generated by the size of the distribution and transmission networks in Romania. Distribution and transmission networks are undersized compared to the current need, so many projects are postponed to later dates,” he said.

“A photovoltaic project involves producing energy from solar power, with one small drawback: production means an hourly time slot from 10.00 to 16.00 in summer. What do we do the rest of the time? Because it’s one thing to produce energy and deliver it at the peak, it’s another to deliver it in a 24-hour band. And this is where technology helps us, because we’re talking about storing energy and delivering it over 24 hours. The storage capacity, at the moment, for Big Energy Storage System, BESS, has reached 2 MWh, and you can accumulate 2-4-6 MWh. More and more, the storage becomes part of the most projects, both in the commercial – small business – sector and in the utility scale projects. The reactive power compensation part also comes into play, especially for industrial consumers – as it is a very important cost component for them. When energy was cheap, the cost component of reactive power was insignificant, but it has become more and more obvious and worth considering when making an investment,” he added.

“Projects exist in Romania, the interest exists, the funding exists, we provide the necessary consultancy and technology to develop such projects. It’s hard to say what the future holds – we have a fixed price until April 2023 for residential, not commercial. And when calculating the return on investment, we have to bear in mind that the price at which we buy energy today is not guaranteed – for more than a year – after which we don’t know what happens. A photovoltaic system, according to our calculations, has a payback of about 4-5 years. If we add an energy storage system, we’re looking at 7-8 years of payback. With a minimum product warranty of 10 years and an average lifetime of 15 years, this means that we will basically have free energy for the whole period after the investment is amortized. These are calculations that we need to look at in the medium and long term, not for 1-2 years, so that we can make an informed decision on an investment,” he concluded.