12 cities in Romania are testing a hydrogen bus from Solaris 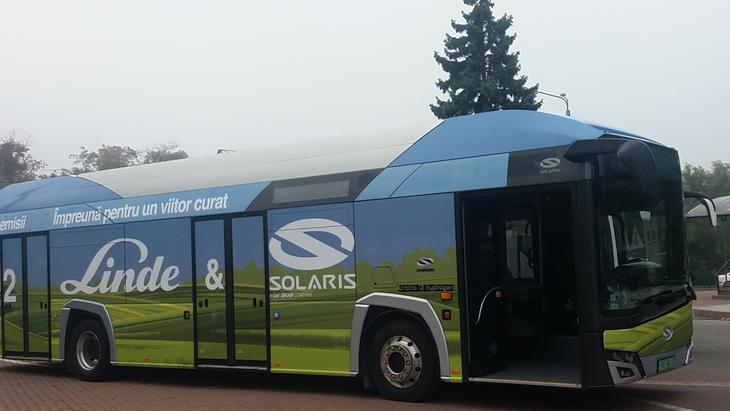 For two months, the Urbino 12 hydrogen bus, produced by Solaris, will be present in twelve cities in Romania according to the following route: Cluj-Napoca, Târgu Mureș, Brașov, Sfântu Gheorghe, Iași, Galați, Constanța, Bucharest, Râmnicu Vâlcea, Craiova, Timisoara and Oradea. Solaris Bus & Coach is one of the European leaders in the production of electric vehicles for public transport.

The Urbino 12 hydrogen bus will run for several days in each city on the tour, to be tested by local governments, in order to familiarize themselves with the latest propulsion technology and to raise awareness of the efficiency of using hydrogen as a completely clean energy source and reduction of carbon dioxide emissions. The tour of the Solaris Urbino 12 hydrogen bus is made in collaboration with Linde Gaz Romania, the partner that ensures its supply of hydrogen.

“Solaris Urbino 12 with hydrogen is without a doubt the solution of the future, already available”, said Daniel Ciolan, General Manager of Solaris Bus & Coach Romania, “and its ecological component guarantees the uniqueness of a sustainable travel experience, completely free of polluting emissions”. In his turn, Ciprian lslai, General Manager of Linde Gaz Romania, welcomed “the interest of some Romanian authorities in testing the latest technologies in the field of decarbonization of public transport”. “In Romania, the authorities can develop hydrogen projects by accessing European financing instruments. Linde offers solutions for public transport, based on over 15 years of experience worldwide, where we have installed over 200 hydrogen charging stations”, said Ciprian lslai.

Launched in June 2019 at the Global Summit for Public Transport (UITP) in Stockholm, Solaris Urbino 12 is the technological vanguard of public transport vehicles without harmful emissions and also a sustainable solution for cities that want to invest in the quality of their environment. Powered by hydrogen, the innovative vehicle offers a range of up to 400 km, while retaining all the advantages of an electric motor.

The Solaris Urbino 12 hydrogen bus is characterized by a low noise level while driving, which guarantees a pleasant travel experience for both drivers and passengers. Moreover, the comfort of passengers will be ensured by a series of benefits such as: air conditioning system, surveillance cameras, but also a modern information system. They will also be able to recharge their mobile devices in the available USB ports, while people with reduced mobility will have a ramp and a compartment for wheelchairs.

In terms of its technical features, the Solaris hydrogen bus uses a set of fuel cells to generate energy. The hydrogen supplied to the fuel cells is converted into electricity, which in turn directly supplies the bus drive system which consists of a wheeled drive axle. The bus is also equipped with a Solaris High Power battery, which acts as an additional electricity storage facility.

The hydrogen required for propulsion, supplied by Linde Gaz in the case of this project, is stored in gaseous state in state-of-the-art tanks, placed on top of the bus. The only by-products generated during the operation of the bus are heat and water in the form of vapors, which means that the vehicles do not release substances harmful to the environment.