Home»Electricitate»We released the 23rd issue of the energynomics.ro Magazine, at the 2019 Energy Strategy Summit!

The 23rd edition of energynomics.ro Magazine was launched on Tuesday, June 11th, within the 5th edition of Energy Strategy Summit.

184 pages of interviews, analysis and opinions, fully bilingual, at the best printed quality will reach professionals in the energy industry in Romania, the managers of the most active companies and officials from regulatory authorities with responsibilities in the energy sector.

ORDER YOUR ISSUE at office @ wing-media.com

For them, we tackle the hot issues of the moment, from the needs of investors interested in the oil and gas sector, to ever delayed clarification of the prosumer segment, from increasingly pressing threats for the district heating sector to the opportunities raised by the firm commitment of European Union on the road to decarbonization. 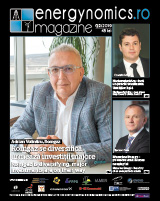 Adrian Volintiru, general manager of Romgaz, talks about the diversification plans of the group. we have learned that not only the investments already announced in the Iernut and Mintia plants are being pursued, but also some in petrochemistry and renewable are contemplated. ” We have to go on with the idea of operating also outside the country in order to turn Romgaz into a top European and global company,” Adrian Volintiru, General Manager, told us.

Cosmin Ghiţă, General Manager of SN Nuclearelectrica, talks about the agreement signed with the Chinese from CGN to incorporate the project company necessary for Units 3 and 4. “In the process of revamping of Unit 1, which will cost 1.2-1.5 billion euro, SNN intends to ensure its future fuel through the possible take-over of Feldioara plant, which belongs to CNU”, says Cosmin Ghiță.

Spencer Coca, Country Manager of Mazarine Energy, presented us the story of an unexpected success – in 2017, Mazarine took over 19 perimeters from OMV Petrom in Romania. “We are now the second largest player in Moldova,” said Spencer Coca, “we have some 400 employees” and “the news is good, we are drilling and we realized that we can drill economically, less expensive than other operators – generally, if we look at costs, we managed to reduce them by up to 40%”, says Mazarine Energy official.

ORDER YOUR ISSUE at office @ wing-media.com